Ankara expects next US defense secretary to focus on Assad regime 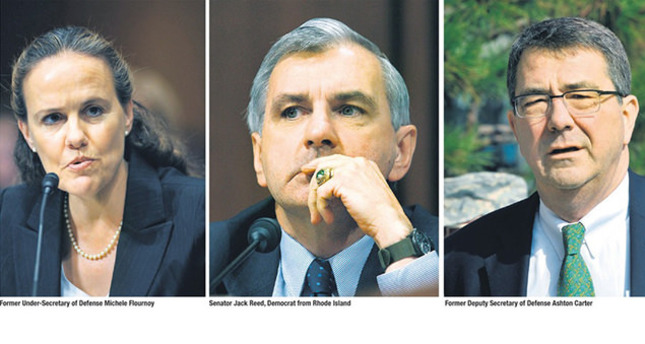 As Turkey and the US mend ties to narrow differences on Syria, Turkey expect the next US secretary of defense to realize that along with fighting ISIS, the Assad regime has to be overthrown

U.S. Secretary of Defense Chuck Hagel gave his resignation on Monday, reportedly due to increased pressure from President Barack Obama. It has also been mentioned that the reason behind Hagel's resignation is due to concerns of his effectiveness regarding global conflicts such as the Ebola crisis and his criticism of the Obama administration's crisis management in the Middle East, especially on the Islamic State of Iraq and al-Sham (ISIS). Hagel's position on U.S.-Turkey relations regarding regional security and conflicts has been more lenient toward Turkey's demands.

During his visit to Turkey in early September, Hagel said, "When we look around the world, Turkey, I think in many ways, can be seen as a model for engaging and practicing a vibrant democracy." In addition, regarding the ISIS crisis within the region, Hagel said that Turkish leadership was productive. During conversations with Turkish government officials Hagel said, "Turkish leaders clearly saw … the overall objective here, when we start thinking through what we're dealing with, both short term and long term." Following his resignation, the questions regarding U.S.-Turkey relations on regional security are beginning to rise. There are three nominees who are being mentioned as the possible candidates for the post – former deputy secretary of defense, Ashton Carter; former undersecretary of defense, Michele Flournoy and Senator Jack Reed.

Flournoy, if elected, would be the first female U.S. secretary of defense. She has been mentioned as having close ties with the former George W. Bush administration's secretary of defense, Robert M. Gates, who also worked with President Obama during his first term. When comparing Flournoy with Hagel, several U.S. media sources have reported that "Hagel has clashed with the White House regarding the Syrian conflict whereas Flournoy has a unique talent to disagree with people without creating hostility." During the Warnke Lecture Series in 2013, Flournoy made several statements regarding the U.S. government's intervention in Libya and its position in the region. She mentioned three possible plans regarding the issue in Syria: "Turkey, Qatar and the Gulf states try to have a common approach to supporting the moderate, non-extremist parts of the rebel forces and what can we do as the U.S. is either to make them successful or to get [President Bashar] Assad to leave and/or have a viable plan to for the post-Assad to prevent a second round of civil war between the extremist and the moderate rebel forces." Flournoy's statements give insight to her position on the regional conflicts in the Middle East as being similar to Hagel's, which would not change U.S.-Turkey relations.

Furthermore, another possible candidate is Rhode Island Democratic Senator Jack Reed. Reed has been viewed by the U.S. media as a less skeptical possible nominee compared to Flournoy, as she comes from the Pentagon. Reed has also taken the role of administration defender during controversial hearings. His position regarding Syria has been supportive of the Obama administration, especially after praising the U.S.-led airstrikes in which he said that he is "doubtful about a deeper military involvement which could lead to an open-ended conflict." However, Reed's spokesman said that he would not accept the position if offered.

The former deputy secretary of defense, Ashton Carter, is also one of the most mentioned possible candidates for the position. Carter is a bona fide nuclear weapons expert and supportive of the U.S. rebalancing to the Asia-Pacific region. During his speech at the U.S. Department of Defense, Carter said, "For these reasons – enduring values and increasing military power – the United States can and will succeed in rebalancing to the Asia-Pacific in the years to come." Although Carter was praised by Congress after his work at the Pentagon, his lack of experience in dealing with terrorist threats in Syria and Iraq as well as the troop withdrawal in Afghanistan might cause hesitancy. Carter had visited Turkey as deputy secretary of defense in early February of 2013. He met Turkish defense leaders and also traveled to the southeastern city of Gaziantep near the Syrian border where he examined the first of two U.S. Patriot missile batteries to be located there. During his visit he said, "The U.S. stands with the people and the government of Turkey, and missile defense is just one way we are doing that." Carter's position toward Turkey and regional issues indicates the current relations with the U.S. will remain as is or become even more strategically developed.