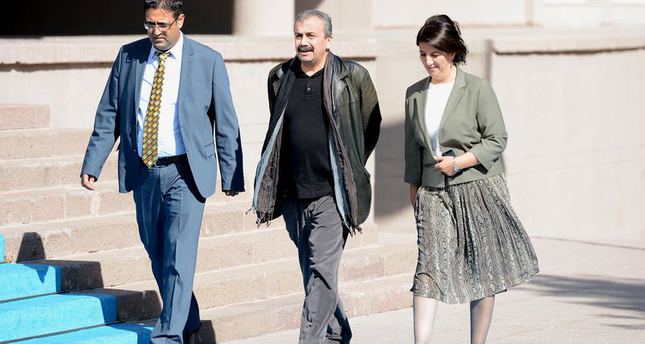 by daily sabah
Nov 27, 2014 12:00 am
A delegation from the Peoples' Democratic Party (HDP) will visit imprisoned PKK leader Abdullah Öcalan to give a fresh start to the reconciliation process between Ankara and Kurds, which stalled due to the October 6-7 Kobani protests that morphed into violent clashes between pro- and anti-PKK groups in eastern Turkey.

According to some Turkish media outlets, a HDP committee including HDP Group Deputy Chairperson Pervin Buldan, İdris Baluken and HDP Istanbul Deputy Sırrı Süreyya Önder will visit Öcalan, who is imprisoned on İmralı Island, on Sunday.

Öcalan recently demanded the number of committee members be increased, and according to allegations, Democratic Public Congress Co-Chair Hatip Dicle and Democratic Freewomen Movement (DÖKH) member Ceylan Bağrıyanık are expected to be included in the committee.

Reconciliation talks stalled after the October 6-7 Kobani demonstrations. Even though the reconciliation process road map was ready prior to the incidents and it was expected that in four or five months the Kurdish issue would successfully come to an end, the demonstrations harmed the government's trust in the HDP and other parties involved in the protests.

The HDP called for a street protest in early October to support Kobani while accusing the government of not doing enough to help the Syrian Kurdish fighters in the besieged town. The call came under harsh criticism from Ankara and high senior officials urged HDP representatives to adopt a softer and more peaceful tone for the sake of the reconciliation process.

A written statement issued by the HDP said that the Justice Ministry positively responded to a HDP committee demand to hold talks with Öcalan and that the committee will visit İmralı Island on November 30.

It is expected that critical issues such as Ankara's call for inaction to establish public order is among the top issues on the agenda. According to government sources, Ankara is to wait until the PKK ceases acts that disturb public order and then a definite call should be made by Öcalan.

A monitoring board for the reconciliation process and establishing a secretariat on İmralı will reportedly also be discussed.

Problems in the reconciliation talks were overcome in the past week after an hour-long meeting to revive it between the HDP committee and Deputy Prime Minister Yalçın Akdoğan on Monday. Reports after the meeting indicated that the meeting was fruitful, setting the stage for a new phase of resolving the Kurdish issue.