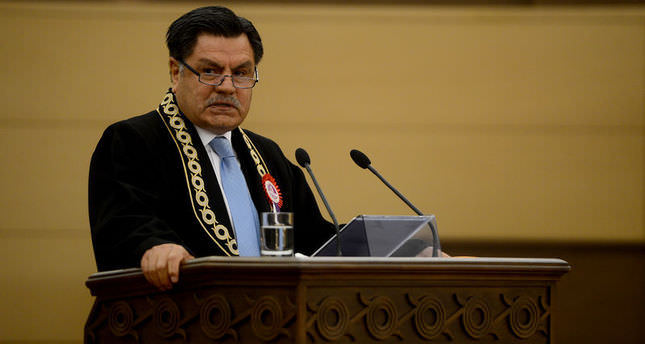 by daily sabah Nov 28, 2014 12:00 am
Haşim Kılıç, the chairman of the constitutional court, has accepted the fact that there is a parallel structure within the state, alluding to the Gülenists that infiltrated state institutions in order to carry out operations in an attempt to overthrow the government.

Kılıç, speaking in a question and answer session in Antalya where he was attending a conference, touched upon the latest debates over the controversial judicial bill, which the government has submitted to parliament.

The bill, which envisages a rise in the salaries of judges and prosecutors and an increase in the number of chambers, had been opposed by some circles who say that it gives expanding control to the government over the judiciary. The most controversial article of the bill is the authority granted to police and prosecutors to detain someone on 'reasonable doubt'. The terminology is deemed problematic by opponents of the bill since it is vague and could be liable to exploitation.

The head of the Supreme Court of Appeals, Ali Alkan, was among those who criticized the bill on such grounds. The Justice Minister Bekir Bozdağ responded to Alkan in a harsh statement which claimed that Alkan's views were "personal" and he was targeting the "political will".

Amid the tension between the two sides, Kılıç was asked by a journalist who the 'actual' sides of the argument are. Kılıç replied: "One side is the government, and the other is the group that dominates the Supreme Court of appeals," implying the Gülenists who are notorious for infiltrating significant bodies in a bid to overtake the government.

"The tension between the sides derives from the desire of one side to have control over the judiciary. " Kılıç was quoted as saying.

He also added that while one side [the Gülenists] want to resume command of the judiciary, the other side is trying to eliminate their influence in the body.

When asked whether the Gülenists control the supreme court of appeals, Kılıç replied "It looks as though there is such a group within the body"

He said further that the tension between the two sides will only end when one side is in charge.

"The civilian actors and the institutions should give up their intention of holding grip over the judiciary. Of course every section wants to use the power to their own benefit, which is wrong, " Kılıç added.