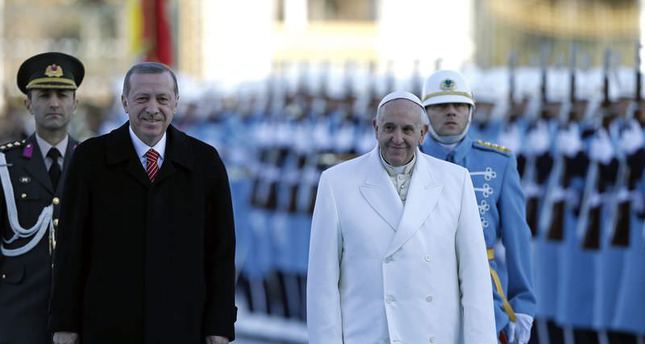 During a three-day visit to Turkey, the spiritual leader of the Roman Catholic Church, Pope Francis I, is poised to impart messages of unity to the Christian world from where the millennium-old East-West Schism began, as Turkey calls on the Western world to champion against Islamophobia

Embarking on one of the most delicate missions throughout his 18 months in the papacy, Pope Francis I arrived to Turkey on Friday with the aim of reuniting Christians, as Turkey called on the pontiff to raise a voice against the increasing Islamophobia in Western countries.

The visit has become central to the relations between Islam and Christianity. Urging Western countries to act against Islamophobia, senior Turkish officials highlighted the need to increase efforts to halt the growing prejudice against Muslim communities residing in the West. Along with Islamophobia, the pontiff's visit is expected to tackle the 1,000-year-old schism between Catholicism and Orthodoxy where it began: Istanbul, then called Constantinople. During the East-West Schism of 1054, medieval Christianity split into two branches: the Eastern Orthodox Church and the Roman Catholic Church. Overseeing the mission of imparting a message of Christian unity and aiming to soften the long-continuing schism, the 77-year-old Argentinian pontiff is expected sign a joint declaration of Christian unity with Istanbul-based Ecumenical Patriarch Bartholomew of Constantinople, who is the spiritual leader of the Eastern Orthodox Church, on his second day of the visit. In 1965, Pope Paul VI and the then Ecumenical Patriarch of Constantinople revoked the mutual anathema that was enacted between Western Catholics and Eastern Orthodoxy in 1054.

As the fourth Pope to visit Turkey, the leader of the Catholic world met with Turkish President Recep Tayyip Erdoğan, Prime Minister Ahmet Davutoğlu and Mehmet Görmez, the head of the Directorate of Religious Affairs, on the first day of his visit in Ankara.

The papal visit also marked the first official welcoming ceremony of a head of state at Turkey's new Presidential Palace, as Francis, the head of Vatican City and spiritual leader of Catholics, issued a joint press release with Erdoğan – the first of its kind with a visiting pope – following tête-à-tête and inter-committee meetings.

In the press conference, President Erdoğan said that Friday's meeting will speak to both the Muslim and Christian worlds and increase hopes for peace between the two communities.

"Racism, discrimination and Islamophobia unfortunately are increasing. We are witnessing the increase of prejudice and intolerance against Muslims in Western countries," said the president, adding that the pope's visit will definitely have a positive impact on the Islamic world and break the prejudice in the Christian world.

Erdoğan emphasized that he and the pope have common views on almost every subject they discussed, including the combatting of terrorism.
The pontiff said that he is very glad to be creating a bridge between different identities and cultures.

"We must enable dialogue and respect between each other to overcome differences," added the pope.

Touching on the humanitarian tragedy in Syria as a result of the civil war and the threat of the self-proclaimed Islamic State of Iraq and al-Sham (ISIS) in the region, Francis said, "Turkey is showing generosity towards those who are affected by the tragedies in Syria."

"The Middle East has been the scene for wars for many years, as brothers murder brothers. We must not shut our eyes to the suffering there," added the pontiff.

After the joint conference, Francis and Görmez held talks over the issues in the Christian and Islamic worlds. Their joint press conference began with peace messages. Görmez said during the press conference, "It is of special significance that we are hosting the pontiff of the Catholic world in our country where members of the divine religions have lived together throughout history without being subjected to any discrimination."
Referring to the Islamophobia, Görmez noted that anti-Muslim actions will not yield any other results aside from going down in history as shameful, dirty pages just as anti-Semitism has stained the pages of history.

"We feel anxiety and concern for the future regarding the Islamophobic paranoia that has already been spread among the Western public opinion and is being used as a pretext for massive pressures, intimidation, discrimination, alienation and actual attacks against our Muslim brothers and sisters living in the West," added Görmez.

Francis said in the press conference that the situation in the Middle East, especially in Syria and Iraq, is tragic and a source of great concern and added, "Extremism that uses religion as a reference should not be allowed."

"Dialogue between leaders of different religions is extremely important as it gives a clear message to all related communities and shows that mutual respect and friendship are possible despite differences," noted the pope.

Francis is expected to visit the Sultanahmet Mosque – known as the Blue Mosque – and the Hagia Sophia – a former Greek Orthodox patriarchal basilica that was transformed into a mosque and is now a museum – in his second day of visit in Istanbul. He is also scheduled to give a Mass at the Roman Catholic Cathedral of the Holy Spirit, participate in ecumenical prayers at the Church of St. George and meet with Bartholomew.
Francis's itinerary does not differ greatly from the former papal visits of Paul VI in 1967, John Paul II in 1979 and Benedict XVI in 2006. Besides Paul VI, all popes visited Turkey on the same date, November 30, which marks the feast day of St. Andrew, the founder of the Eastern Church and patron saint of Orthodoxy, which is similar to St. Peter for Catholics.

The Pope's humble request for his visit to Turkey has also received attention due to his preference to stay at the Vatican Embassy in Ankara and Vatican Consulate in Istanbul instead of a lavish hotel. He also requested a simple car instead of a Mercedes usually assigned to transport heads of state, and the pontiff's dinner menu was requested to be the same he always requests, including a simple meal of chicken, fruit, salad, cheese and Argentinian empanadas.

A total of 900 journalists have been accredited to follow the pope's visit to Turkey and 69 of them have been traveling with the pontiff during his visit. Additional security measures in Ankara and Istanbul were also implemented to prevent any problems that may arise during his visit.
The pope's visit to Turkey is his sixth trip outside Italy since his election in March last year. Francis was originally invited to Turkey earlier this summer by Bartholomew, who had traveled to the Vatican to take part in prayers for peace between the Argentinian pope and Israeli and Palestinian leaders.