Does reconciliation process have precedents in Colombia? 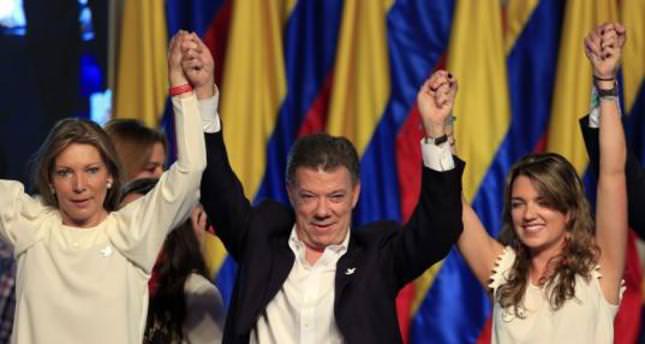 Latin America’s Colombia and Turkey are sharing a mutual fate of ending decades-long conflict in their countries. According to experts, reconciliation in such processes could face obstacles, but with real commitment both sides can solve the problematic issues

Colombia was on the brink of reaching a conclusion to the peace talks that seeks to end five-decades long conflict between the government and the FARC, an illegal military organization labeled as a terrorist group by both the U.S. and EU, before the most recent incident of a general's abduction by the organization led to a suspension in the talks.

Colombian society, which unified in support of the peace process that was first launched in the 1980s, were very close to finally enjoying peace being restored in the country. But the progress that has been achieved by both parties is now on hold as Colombian President Juan Manuel Santos – who was re-elected on a promise of driving the peace process forward – told the Colombian officials not to attend the latest (fourth) round of the talks in Havana until the five hostages, including the general, were released.

After 30 years of failure, the government and the FARC have been working with the common purpose of assessing recommendations for the organization and the government during the peace talks in Havana. The talks focused on issues of a bilateral ceasefire and the relinquishment of arms.

Colombians, who have grown impatient over reaching a conclusion in the talks, now face the danger of regression in the progress that has been achieved so far. Santos stipulated that the general, along with another military official and a civilian who were also abducted, must be returned in order to resume the talks. Following the ultimatum, the Marxist rebels agreed to release two of the hostages on Tuesday and vows to release the general by the weekend, which most likely will lead to resumption of the talks.

Turkey, similarly, had also experienced shaky ground over its reconciliation process after violent provocateurs claimed dozens of lives in Kobani protests. Turkey's geographical position, which is situated in the middle of a circle of fire as it neighbors in the Middle East continue to contend with turmoil, puts the process into a very sensitive state.

Deadly protests, which were staged by pro-PKK radicals in support of Kobani, followed by PKK attacks, prompted government officials to deliver statements saying they were firm in continuing the process despite the efforts to impede it. The Peoples' Democratic Party (HDP), on the other hand, strained the already tense relations when its leader called on the protesters to pour into the streets, which intensified the protests.

The government has questioned the sincerity of the HDP in continuing the peace process following the incidents. The government has made it clear that it will not pursue peace talks unless the latter convinces the government of its sincerity and commitment to the process and has further stipulated that the HDP must refrain from provocative acts that might impair public order so that the process may resume. The pro-Kurdish party later held several talks with government officials and announced that they will not leave the reconciliation process and called Kurds to not opt violence when staging protests.

The FARC, on the other hand, has pointed out on its official website that both the insurgents and the active military have a genuine will to both establish and conduct the process. Both parties are convinced that an armistice agreement could be reached and their demands could be negotiated through politics and diplomacy instead of resorting to arms, the FARC further stated.

Indeed, the whole of Colombian society, along with the FARC, have been in favor of a settlement since the talks began, and with the Colombian people running out of patience, all eyes have turned to the peace talks in Havana. Turkey, which still faces opposition from both the public and some members of the opposition parties over its peace process, needs a unified demand for peace as well.

President Recep Tayyip Erdoğan mentioned the need for united support over the process on Nov. 9 when he said that it was wrong to place
Kurds on one side of the reconciliation process and the government on the other side, as the process concerns the whole of Turkish society.
"The entire Turkish population should embrace it in order to reach a speedy conclusion to the process," Erdoğan said.

The difference between the FARC and the PKK

The conflict between the Turkish government and the PKK, considered a terrorist group by Turkey as well as the U.S. and the EU, has been ongoing since 1984 and has resulted in some 40,000-100,000 casualties, as well as major economic losses for Turkey. The PKK, which at first aimed to establish a Kurdish homeland in southeast Turkey, has also suffered heavy losses during the clashes.

The PKK differs in both strength and nature from the FARC. The FARC is bigger in both numbers and its capacities. Although the Colombian government has announced its strength to be around 8,000, the army is believed to consist of more than 15,000 fighters. The FARC is also alleged to have huge financial reserves. In addition, the geography of the militants renders them hard to defeat, according to sources. The FARC has bases in huge jungles that make them impossible to drive out unless they voluntarily retreat. The PKK, on the other hand, used to be stationed in the mountains before they announced in 2013 that they have withdrawn from Turkish territory to northern Iraq. However, the withdrawal of its militants were later cancelled by the organization.

With regards to the failed attempts of reaching reconciliation in Turkey, Colombia has already "been there and done that," with many failed efforts up until now. The former Colombian President, Belisario Betancur, was the one who initiated the search for a negotiated solution to the internal armed conflict in 1984, after 20 years of fighting. In Turkey, then Turkish Prime Minister Recep Tayyip Erdoğan, announced in December 2012 that the government was holding peace talks with the incarcerated leader of the PKK, Abdullah Öcalan. It took Turkey longer to initiate the process than Colombia – 8 years more – due to, according to some experts, the previous governments' opposition to negotiate with a "terrorist" organization. Some experts also believe that transparency during the peace talks has helped to improve Colombia's process. Previously, Turkey had conducted the process without transparency, which some say accounts for skepticism and suspicion among the Turkish population towards the process.

But the reconciliation process, which became a government policy with the framework law enacted roughly six months ago, will be pursued with transparency, government officials have recently said.

Selcan Serdaroğlu, an academic specializing in Latin American politics at Galatasaray University, attributed the progress of the peace process in Colombia to "internal transformation" and the suitability of the conditions on the international platform.

"The reconciliation talks were considered positive as many came to understand that the cost of the conflict was incredibly high and the pressure that had been put on the judiciary by the executive was dispelled. The FARC has also been isolated in the conflict it both created and fell victim to, which paved the way to the peace talks. Its inability to find an opportunity for representation and the killing of their leader was also influential in launching the talks." Serdaroğlu said. Serdaroğlu also underscored the significance of the campaigns launched by the society at large. The latest of these pro-peace campaigns was called "Soy Capaz" (I am capable) and was launched to help muster support for the agreement.

"Some companies use the 'Soy Capaz' slogan on their products" Serdaroğlu said, and noted that, as an academic, another initiative to help ensure peace that drew her attention was the courses that some universities had begun offering such as "post-conflict reconciliation" and "transitional justice."

The society has contributed much to the process, Serdaroğlu said, adding that the entity who will have the last word in the process will be the people since once there is an agreement on peace, it will be taken to a referendum.

Vahdettin İnce, a Kurdish author and political analyst, spoke to Daily Sabah and commented on the current situation of Turkey's reconciliation process. When asked about the models of various peace processes that are being pursued by governments and civil society groups around the world, İnce said it is necessary to learn from the examples of existing peace processes, but local and historical examples would provide more benefits and lead us to quicker conclusions than those of other countries.

"It is possible to see similar issues and problems elsewhere. There are always examples of peace processes happening somewhere around the world and they should be carefully assessed to see if there can be any lesson learned. However, we must keep in mind that they all have unique features. Turks and Kurds share history, religion and geography. They had agreements and disagreements that determined the country's fate and it was set within a particular historical context. These should be taken as the basis of the peace process to reach conclusion more quickly. No need to go that far [to Colombia?]," İnce said.