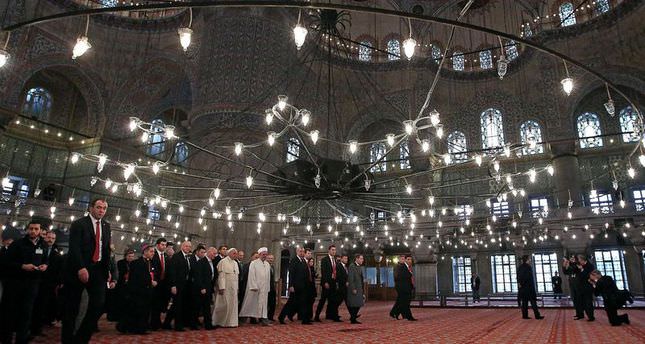 by daily sabah
Nov 30, 2014 12:00 am
Shortly after leaving the airport on Saturday, Pope Francis – traveling in a modest car, at his request – arrived at Istanbul's 17th century Sultanahmet (Blue) Mosque. Amid tight security of an estimated 7,000 police officers on duty in the city, Pope Francis was greeted at the Ottoman Era mosque by Islamic religious leaders. Rahmi Yaran, mufti of Istanbul, talked to the pope about prayer, which is one of the five pillars of Islam, plus the mosque's architecture and read some verses from the Quran. "I hope the visit will be fruitful and will contribute to world peace," Yaran told the pope, who thanked him for his remarks. The pair then stood for a moment's silent reflection facing east. This was the second time a Catholic pontiff has prayed in the landmark mosque.

The pontiff then traveled in a small motorcade the short distance to the city's Hagia Sofia museum – a former Byzantine cathedral first built in 360 A.D. and converted into a mosque after the 1453 Ottoman conquest of the city. The iconic building became a museum in 1935.