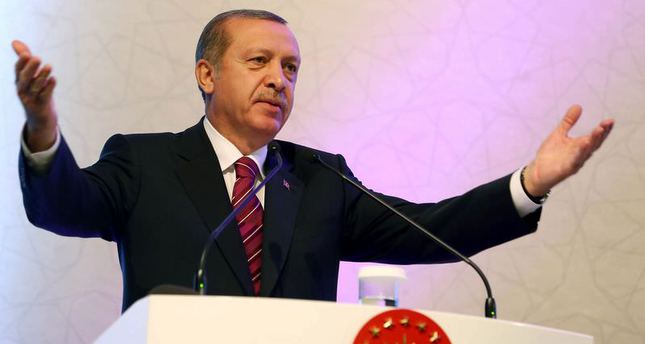 by AA Nov 30, 2014 12:00 am
Airstrikes alone would not stop ISIS unless accompanied with a ground operation, Turkish President Recep Tayyip Erdoğan has said.

The president's remarks came on Saturday at the fourth Turkish-British Tatlı Dil Forum, an annual meeting which was inaugurated between the governments of Britain and Turkey at the prime ministrial level in 2011.

The event, which brings together senior figures from politics and business world as well as scholars and artists, aims at "strengthening and institutionalizing the civil dialogue" between Turkey and the United Kingdom, Turkey's U.K. embassy says.

"The self-proclaimed Islamic State of Iraq and al-Sham (ISIS) currently has 40 percent of Iraq under control. We have a similar situation in Syria as well. Airstrikes are not enough to stop this occupation," Erdoğan said, adding that a ground operation was in order.

Erdoğan also stressed the significance of establishing no-fly and safe zones in both Iraq and Syria to "get results," in addition to training and equipping forces fighting against the terrorist group.

"We cannot consider them [Iraq and Syria] apart if we want to succeed against terror; and take care of the (Bashar) Assad regime which conducts state terrorism," he said.

"The instability and conflict in the region affects the whole world. ISIS is not only a regional threat; it is also a threat against global security and stability," he said.

"Turkey is determined to fight against this threat, and we expect the same determination from the international community."

Erdoğan said that British Prime Minister David Cameron is going to visit Turkey on December 9 with the aim of further strengthening bilateral relations.

"This visit is not only important for Turkey-U.K. relations, but for the peoples of countries and regions going through a difficult period," he said.

Erdoğan called for an "intense cooperation" between the two countries "in order to take stable, constructive and conclusive steps" in regional and global matters.

"Our strategic cooperation is of vital importance for global peace, stability and democracy", he said.

Erdoğan said that economic relations were one of the areas that need to be developed further in this regard, and said that the goal was to increase the trade volume between the two countries up to $19 billion by 2015.

"We expect further joint projects between Turkish and British businesses in construction and engineering whether in Turkey or third countries."