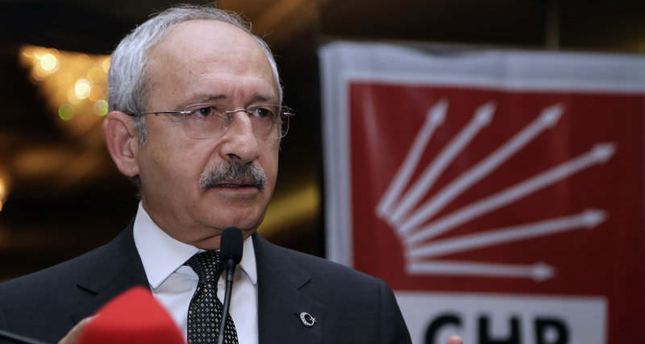 by Ali Ünal Dec 01, 2014 12:00 am
Even though the chairman of the main opposition Republican People's Party (CHP), Kemal Kılıçdaroğlu, has sent mixed signals about the rumors of an electoral alliance with the Peoples' Democratic Party (HDP), his latest remarks indicate that the CHP has left the door open for a CHP-HDP electoral alliance.

"An electoral alliance with the HDP is currently not on our agenda, but even 24 hours is a long time in politics," Kılıçdaroğlu said during his visit to the southeastern province of Diyarbakır over the weekend. However, two days ago Kılıçdaroğlu denied the allegations and said that they never talked about an electoral alliance. "Apart from us, everybody else is talking about it, but we never talked about it," he said. Turkish media outlets reported on Friday that Kılıçdaroğlu also criticized the HDP's role in the October 6-7 Kobani demonstrations, which started with the HDP's call for street protests in support for the Syrian town of Kobani and its fight against the self-proclaimed Islamic State of Iraq and al-Sham (ISIS) that led to street violence and caused the deaths of nearly 40 people across the country. "You will burn Atatürk statues, burn libraries, kill innocent people and after that we will have an electoral alliance with them? It's not possible," Kılıçdaroğlu said.

Although Kılıçdaroğlu denied the rumors, possible scenarios related to an electoral alliance between the CHP and HDP continues to be discussed in political circles in Ankara. After the CHP and National Movement Party's (MHP) joint candidate for the presidential election failed to win the August 10 election, former CHP whip, Deputy Muharrem İnce, called the presidential election "a fiasco" and later challenged Kılıçdaroğlu for party chair in the extraordinary party congress in September. Kılıçdaroğlu received 740 votes from 1,265 delegates and İnce garnered 415 votes at the extraordinary party congress. İnce received nearly three times more votes than the number of signatures he received for his candidacy, showing he was able to secure the support of nearly one-third of the delegates. Furthermore, in recent weeks CHP Ankara deputy, Emine Ülker Tarhan, of the party's nationalist wing, blamed Kılıçdaroğlu's administration for having "wrong and weak policies," claimed that the party is not representing the people's sentiments and resigned from her party. Following her resignation, Tarhan formed a new political party called the Anatolia Party, which was followed by more CHP members calling for Kılıçdaroğlu's resignation. Most recently, İzmir Deputy Birgül Ayman Güler requested Kılıçdaroğlu and his team resign due to their poor administration skills. According to sources within the CHP, the resignation of Emine Ülker Tarhan and other deputies from the party's nationalist wings was welcomed by the Kılıçdaroğlu administration. "Emine Ülker Tarhan and deputies from nationalist wings would be the biggest obstacle for a possible electoral alliance with the HPD and therefore, their dissolution from the party is welcomed by Kılıçdaroğlu and his team," a political advisor within the CHP said on the condition of anonymity. "Kılıçdaroğlu has to form an electoral alliance with the HDP to increase votes, otherwise he will not be able keep his seats after the June 2015 general elections," another political advisor in the CHP said.

Rumors about a CHP-HDP electoral alliance have been written about by several media outlets in September, but CHP Secretary General Gürsel Tekin denied the allegations. Indicating that the speculations are made by referring to unfounded news related to "two parties that are to make an alliance," Tekin said that conspiracy theories are constructed with misleading information. "As the CHP's secretary general I'm clearly saying what has been done is enacting perception management. Reports and news on this so-called alliance are in no way connected to reality," Tekin said in a written statement.

Even with these denials, sources within the CHP believe that forming an electoral alliance between the CHP and HDP may not be as far-fetched as it appears and it would be the best option for Kılıçdaroğlu to protect his seat after the June 2015 general elections.

Furthermore, the CHP's previous efforts to form an alliance could support these claims. In 1991 the Social Democratic People's Party (SHP) entered general elections in alliance with the pro-Kurdish People's Labor Party (HEP) and then the CHP and SHP agreed to merge in 1995. Later, officials from the Kurdish nationalist Democratic People's Party (DEHAP) confirmed that they met and discussed an election alliance ahead of the 2002 parliamentary elections. Moreover, former CHP Deputy Murat Karayalçın revealed in recent years that former CHP leader Deniz Baykal met with administrators of another pro-Kurdish party to discuss an electoral alliance in 2004.