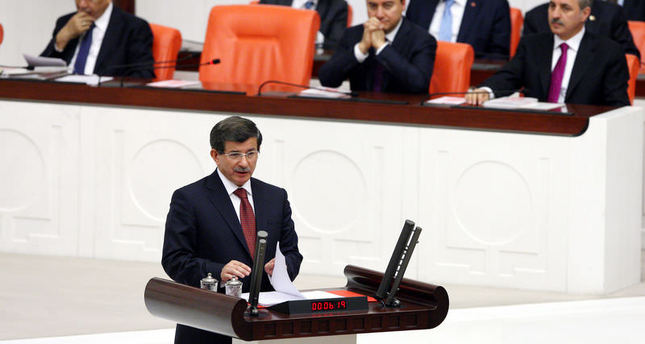 by Daily Sabah Dec 01, 2014 12:00 am
Prime Minister Ahmet Davutoğlu said that neither the government nor its members were involved in the gag order imposed on the parliamentary commission established to investigate four former ministers accused of corruption during the Dec. 17 operation.

"The government never requested the gag order," Davutoğlu said, speaking to columnist Nihal Bengisu Karaca in an interview. He said that he was not aware of the order as it was imposed by an independent body unaffiliated with the government, and that nobody had requested such an order to be imposed.

"The chairman of the commission is from the AK Party [Justice and Development Party], but we are not allowed to speak regarding this matter," he said, adding that once members of the commission are chosen, they act on behalf of Parliament and are independent. He underscored that he has never called a member of the parliamentary commission, and would never call them, as he believes the commission is there to serve an important purpose that should not be shaped by anyone's influence.

The prime minister said that he would never defend any sort of a restriction on liberties, and that Turkey should not be known as a country that imposes restrictions. Davutoğlu pointed out that the parliamentary commission follows a procedure that is similar to a judicial procedure where all the rules of confidentiality apply. He said that there is no final verdict yet, and it would be unfair to influence the commission, as Parliament and the commission should be neutral and wait for the results of the investigation. "It is necessary to leave the commission alone so that they can do their job," Davutoğlu said and criticized some media outlets for trying to break the ban.

Davutoğlu also commented on the Peoples' Democratic Party's (HDP) resignation from the commission, saying it was wrong since it closes the door for them to seek justice in Parliament.

The gag order has received harsh criticism from opposition parties and some political figures, who assert that it is a crime and that the commission has no right to demand a publication ban on the scope and details of the investigation. The Turkish Journalists' Union and Press Council has argued that the gag order is censorship.

On Dec. 17, 2013, the Financial Crimes and Battle Against Criminal Incomes department of the Istanbul Directorate of Security detained 47 people, including government officials as well as prominent businessmen as part of an investigation led by a prosecutor allegedly affiliated with the Gülen Movement. The movement is seen as a national threat by the government, which accuses its members of wiretapping thousands of people including Turkish government officials, encrypting phones and allegedly holding posts in state institutions with the aim to overthrow the government. The movement is led by Fethullah Gülen who lives in self-imposed exile in the U.S.