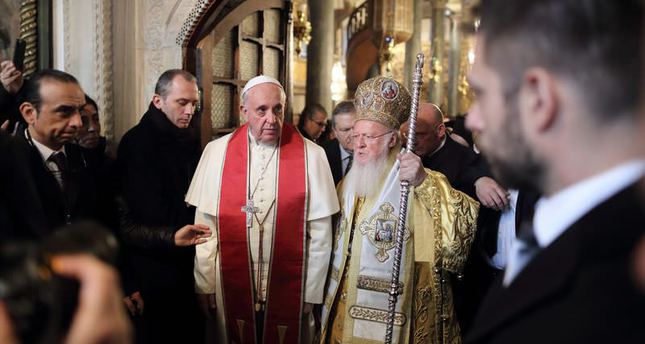 by AA Dec 01, 2014 12:00 am
Pope Francis voiced hope for the opening of the Turkish-Armenian border as a sign of mending ties. He reportedly made the comments during his flight back to the Italian capital of Rome late on Sunday after his three-day visit to Turkey.

According to a report by Catholic News Service, Pope Francis praised Turkish President Recep Tayyip Erdoğan's statement in 2013 regarding the 1915 incidents as an "outstretched hand" and expressed his hope that the border gates, which have remained closed for the past two decades, would open.

Turkey closed its border with Armenia in 1993 following the escalation of the latter's conflict with Azerbaijan over the Nagorno-Karabakh region.

The pope also called on Muslim leaders around the world to condemn the extremist acts conducted in the name of Islam.

He said that he told Erdoğan during their most recent meeting that "it would be beautiful if all Islamic leaders – whether they be political leaders, religious leaders or academic leaders – would say clearly that they condemn [terrorism] because that will help the majority of Muslim people to say, 'that's true," Catholic News Service reported.

Francis began his official trip to Turkey on Friday, which saw him meet top officials including President Erdoğan, Prime Minister Ahmet Davutoğlu and the head of the Presidency of Religious Affairs, Mehmet Görmez, as well as the Fener Greek Patriarch, Bartholomew I, with whom he signed a declaration towards overcoming hurdles that perpetuate the split between the Catholic and Orthodox churches.