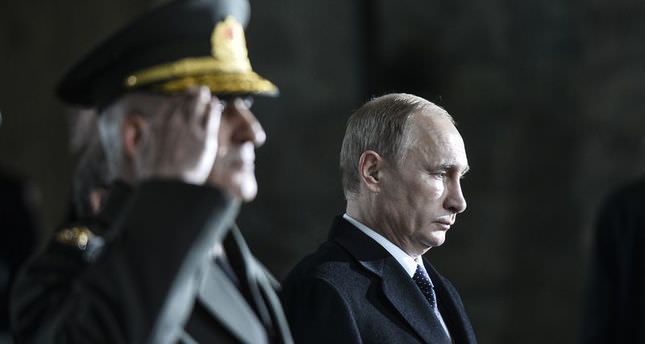 by AA Dec 01, 2014 12:00 am
Russian President Vladimir Putin started his one-day visit to Turkey in Ankara on Monday with a visit to the resting place of Turkey's founding leader Mustafa Kemal Atatürk, the Anıtkabir.

Arriving at the Anıtkabir at around 1:45 p.m. local time (1145GMT), Putin walked behind Turkish soldiers towards the Anıtkabir through the path known as the Road of Lions.

Putin left a wreath of red and white carnations at Atatürk's tomb and then headed to a special room to write in Atatürk's Memorial Book in Russian.

He thanked Atatürk for his contribution to the development of relations between the two countries.


Putin will then head to the newly-built Presidential Palace of Turkey, where he will hold a bilateral meeting with the Turkish President Recep Tayyip Erdoğan.

After the meeting, Putin and Erdoğan will co-chair the fifth High-Level Cooperation Council between Turkey and Russia.

The two leaders are expected to review the full spectrum of bilateral relations, including the implementation of strategic joint projects in the energy sector.