HDP co-chair not on the side of reconciliation, asserts expert 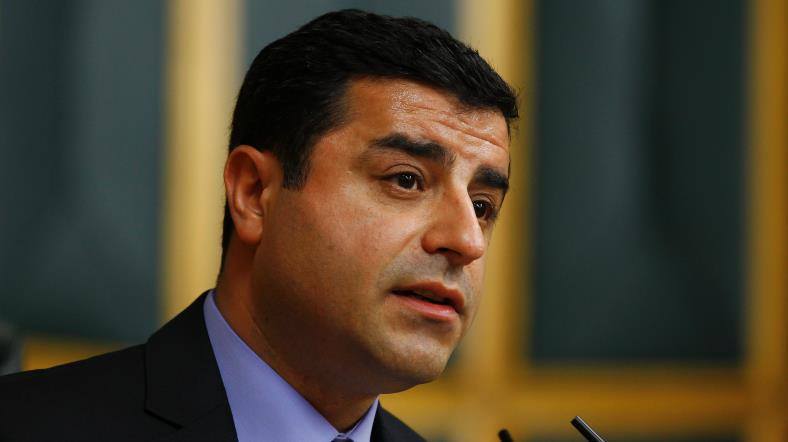 by Sena Alkan Dec 02, 2014 12:00 am
Pro-Kurdish Peoples' Democratic Party (HDP) Co-Chair Selahattin Demirtaş asserted that Turkey allowed Islamic State of Iraq and al-Sham (ISIS) militants to use Turkish soils in its attacks on the northern Syrian town of Kobani, which has endured ongoing clashes between Syrian Kurds and ISIS. Speaking at his party's provincial meeting in the southeastern city of Gaziantep on Sunday, Demirtaş said, "ISIS attacked Kobani's soils through Turkey."

He added, "The governorate, Turkish armed forces and prime ministry denied the attack, but there are video records."

"Claims that [a] vehicle reached the border gate by crossing through Turkish soil [is] a lie," read a statement released by the government's press office in the border town of Suruç.

Even though the statement on Saturday confirmed that one of the suicide attacks involved a bomb-laden vehicle that detonated on the Syrian side of the border, it denied that the vehicle had crossed into Kobani via Turkey.

"Contrary to certain claims, no Turkish official has made any statement claiming that the bomb-laden vehicle had crossed from Turkey. The security forces who are on alert in the border region have taken all necessary measures," the statement continued.

In his comment to Daily Sabah, columnist and Kurdish politics expert, Kurtuluş Tayiz, said that the video record to which Demirtaş referred to was refuted by local media outlets in the region. Tayiz also added that the border crossing mentioned is not Turkey's southeastern border of Mürşitpınar and the figure is not an ISIS militant, but more likely a YPD militant – an armed wing of the Democratic Union Party (PYD) in Syria.

"As a co-chair and leading figure in the HDP, to assert a claim based on this video record is frivolous," added Tayiz, noting that Demirtaş's stance towards the reconciliation process should be questioned after such statements.

Referring to the October 6-7 Kobani incidents that increased the tension between pro and anti-PKK groups, Tayiz added, "In an atmosphere where both sides are trying to decrease the tension following the Kobani protests', he [Demirtaş] targeted the government with his disinformation and fuelled the question [regarding his stance toward the reconciliation process]."

When asked whether there was a change in the HDP co-chair's stance toward the reconciliation process that started between Ankara and the Kurds, Tayiz asserted that Demirtaş is uncomfortable with the developments to put the process back on track.

"What we should evaluate is whether Demirtaş is on the side of reconciliation or deadlock. It seems that with the stance he has taken, it is as if he wanted to see a lack of a solution to the process."

Tayiz further asserted that there are some HDP and Qandil members standing against the reconciliation process.

ISIS launched a suicide attack on armed Kurdish factions in Syria's Kobani, near the Turkish border. While the Britain-based Human Rights Observatory Group confirmed the attack, no casualties were reported due to the difficulty of receiving information. Also, Kurdish groups said the assault began when a suicide bomber driving an armored vehicle detonated his explosives on the border crossing between Kobani and Turkey.

While Turkey faces a threat from beyond its borders due to the ongoing clashes between Syrian Kurdish fighters and ISIS militants and the regional chaos triggered by those figures, Ankara seeks to successfully conclude the reconciliation process between Ankara and the Kurds to ensure stability in southeastern Turkey and overhaul the decades-long PKK attacks in the region.

According to the statement, Öcalan has underscored the importance of creating legal guarantees for the upcoming stages of the reconciliation process to establish permanent peace and democracy.

The reconciliation talks have relaunched between Ankara and the HDP committee after they were suspended. The relations between the government and the HDP soured due to the HDP's call for street protests accusing Ankara of not extending enough help to Syrian Kurdish fighters in Kobani and supporting the ISIS militants in early October. The Kobani protests started after the HDP's call morphed into violent clashes between pro and anti-PKK groups and killed dozens of citizens on the October 6-7.

The HDP committee convened with Deputy Prime Minister Yalçın Akdoğan following the suspension caused by the October 6-7 incidents and both sides expressed their determination to successfully end the Kurdish issue in the upcoming months.