Turkey and Russia agree to prevent chaos in Syria 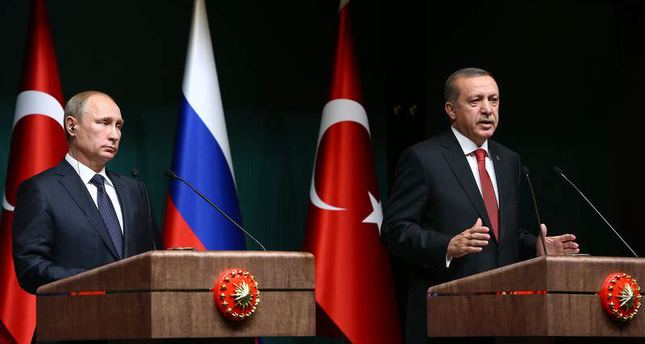 by AA Dec 02, 2014 12:00 am
Turkey and Russia agree on working to avoid more chaos in Syria even as they widely differ on how to handle the ongoing crisis that has led to tens of thousands of deaths over the last four years.

Russian President Vladimir Putin said his country agrees with Turkey on not allowing the chaotic environment in Syria to continue. While Moscow has been the staunchest ally of the Syrian regime during the four-year civil war in the country, Turkey thinks the removal of the self-proclaimed Islamic State of Iraq and Sham (ISIS) terrorist group from Syria would be effective only if the Bashar al-Assad's regime is also removed.

"We mutually think that the situation in Syria is not normal," Putin said. "We don't want certain terrorist groups to gain strength," referring to ISIS, which controls large swathes of territory in Iraq and Syria.

Speaking on the Syria crisis, Erdoğan was firm in his belief that the Assad regime should be ousted and a consensus should be built against ISIS as well.

"I have clearly stated that the recent regime in Syria terrorizes, kills and tortures. We differ on how to bring an end to the current situation there," Erdoğan said.

Putin, meanwhile, said that Russia is making efforts to stop the "bloody war and conflicts" in Syria.

"Are we insisting on Assad to be in power? I would like to convey that question to the Syrian people. An election was held there and we saw that Assad has major support. However, we do not think that the situation in Syria is normal," Putin said, adding that Russia has limited contact with the Syrian government.

Erdoğan, on the other hand, opposed Putin about Syria's presidential election held in June. The voting resulted in victory for Assad, who received nearly 90 percent of the votes.

Erdoğan said: "The ones who stage coups always prevail with major votes. We saw this kind of a situation in Turkey as well, when the pro-coup mindset won the elections with 80-90 percent of total votes. They conduct the elections with the "open voting and secret counting" method. That way, they could announce the results in any way they like. The exact same thing also happened in Egypt."