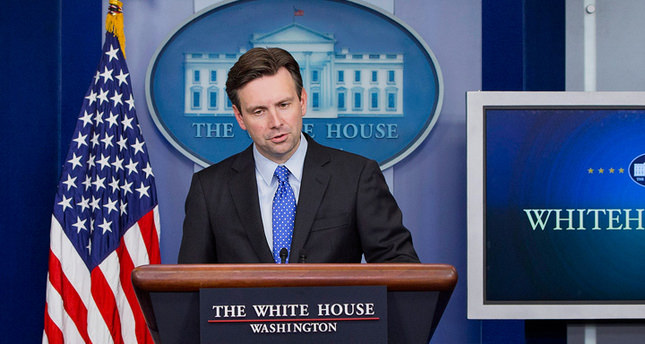 by Daily Sabah with Agencies Dec 02, 2014 12:00 am
The White House ruled out claims on Monday that there are current plans to create a no-fly zone along the Turkish-Syrian border following an international media report that U.S. officials are in talks with the Turkish government regarding a zone to be established for humanitarian purposes.

Considering the timing of the report as "curious," Turkey questioned why the report emerged the same day as Russian President Vladimir Putin's Ankara visit with 10 ministers to talk about the economy and energy cooperation. Governmental sources on Monday commented to Daily Sabah that they are skeptical about the report and its accuracy must be questioned.

According to regional experts, the timing of the report is not a coincidence as the anti-Islamic State of Iraq and Syria (ISIS) coalition leader is not happy that its NATO ally is strengthening ties with Russia, which has had sanctions levied against it by the EU and U.S. for its role in the Ukrainian crisis and its annexation of Crimea. Analysts say that during the visit of U.S. Vice President Joe Biden to Turkey last week, Turkish leaders reiterated their concerns over a possible influx of refugees from war-torn Syria, and that ousting President Bashar Assad is key to fighting extremists in the region and for bringing peace and stability to Syria.

White House spokesman Josh Earnest told reporters that the U.S. was "open to discussing a range of options with the Turks," but that a no-fly zone over Syria was not on the table "at this point."

Since the beginning of the Syrian civil war and the Syrian refugee influx, Turkey has been demanding a safe zone and a no-fly zone on its borders to shelter refugees, the number of which exceeds 1.6 million inside Turkey.

President Recep Tayyip Erdoğan has highlighted that Turkey's three demands which are to train and equip the moderate Syrian opposition, a no-fly zone and a safe zone must be met if Turkey is to participate in any military action in Syria with anti-ISIS coalition, led by the U.S., while also calling for a broader strategy to fight ISIS. So far, except for the second most active country in the coalition, France, Ankara's NATO allies, including the U.S. have not even come close to accepting the creation of a no-fly zone along the Turkish border, alleging that their priority is to stop ISIS's advance in the region.

Since the civil war erupted in Syria in early 2011, there have been repeated calls for a no-fly zone to protect the rebels and refugees.

Former top U.S. diplomat Hillary Clinton was apparently in favor of creating such a zone, but President Barack Obama has consistently ruled it out, concerned that Washington would be drawn deeper into the conflict.

Bloomberg reported on Monday that a new proposal is being discussed by U.S. officials under the name "air-exclusion zone," which would be established as a buffer area inside Syria along the Turkish border, manned by Turkish soldiers and protected by U.S. air power. The purpose of establishing the zone would reportedly be to ensure protection for some Syrian rebels along with civilians who are escaping ISIS, which has taken over large parts in Syria and Iraq, as well as fleeing from the Assad regime. The zone, if implemented, would also increase the safe flow of humanitarian supplies to Syria.

Likewise, The Wall Street Journal reported on Monday that the U.S. and Turkey are close to an agreement on joint military action against ISIS in northern Syria. The Wall Street Journal, citing officials from both countries, reported that the proposed deal would allow the U.S. and its coalition partners access to Turkish air bases to use as launch points for air campaigns. The agreement would also include a protected zone along part of the Syria-Turkey border that would be off limits to Syrian government aircraft, and provide protection for moderate Syrian rebels and refugees fleeing the country's bloody, three-year civil war. U.S. officials told the paper that talks between the two nations were still in the preliminary stages, and a final deal may not be agreed upon for weeks. In exchange U.S. and coalition aircraft would use Turkey's İncirlik base as well as others to patrol the zone to make sure that rebels operating on the Turkey-Syria border do not come under attack.

"We've made pretty clear on a number of occasions that while we're open to discussing a range of options with the Turks... we do not believe that a specific no-fly zone proposal at this point would best serve the interests that we've all identified in terms of trying to resolve the situation in Syria," Earnest said.

The report came just as Secretary of State John Kerry was heading to Brussels for talks on Wednesday with ministers from the 60-strong global coalition fighting the ISIS group.

He is accompanied by General John Allen, the U.S. pointman forging the coalition to counter the threat from the group which has captured a swathe of territory in Iraq and Syria.

"It's an opportunity to take stock of where things stand, obviously discuss what needs to happen from here, provide updates on where countries stand," said State Department spokeswoman Jen Psaki.

She said Washington continued to review a number of options including a no-fly zone, but insisted such discussions were "ongoing."

"We continue to have differences" with Turkey, Psaki told reporters, stressing "we haven't made a decision about a specific course of implementation, we're just continuing to have a discussion with Turkey."