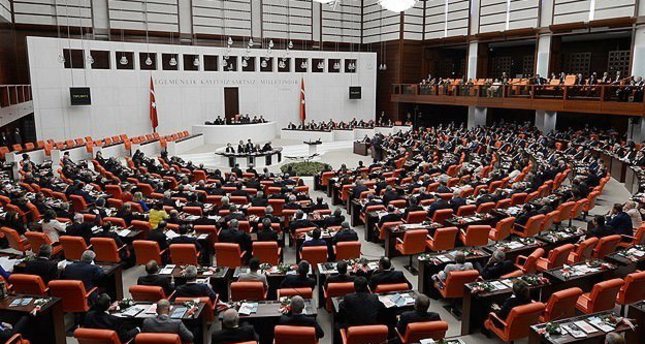 by Daily Sabah Dec 03, 2014 12:00 am
The judicial bill aimed at revamping the current judicial system was approved by Parliament on Tuesday night. Prepared by Justice and Development Party (AK Party) Kırıkkale deputy, Ramazan Can and Isparta deputy Recep Özel, the bill includes items that were harshly opposed by opposition parties and some members of the judiciary.

The bill aims to broaden the power of law enforcement, including the police, judiciary and prosecutors due to the Oct. 6-7 Kobani demonstrations – called for by the Peoples' Democratic Party (HDP) – that morphed into violent clashes between pro- and anti-PKK groups and claimed dozens of lives. The government is seeking to reach EU norms in the judicial system.

The item most debated in the bill is the change of the criminal code related to the authority to conduct a search on a suspect's body, house or business from "strong suspicion based on concrete evidence" to "reasonable doubt" as in some European countries such as France, Germany and the U.K. In France, police may detain suspects if they are under penalty of imprisonment within the scope of "reasonable doubt." Even though reasonable doubt is enough for German police to search a suspect, a judicial decision is necessary to search residences. In the U.K., the possibility of being involved in a crime is enough for reasonable doubt.

Although attorneys will continue to have access to the contents of a client's file during the investigation period and take a copy of required documents free-of-charge, in the event the access to and taking a copy of said files and documents may endanger the investigation, the attorney's right to access documents on their clients can be restricted by a judicial decision upon request of the public prosecutor. In Germany and the U.K., attorneys are able to access files once the investigation is finalized. In France, attorneys have the right to access all files on their clients and are able to investigate all administrative, disciplinary and crime complaints filed against them.

The bill seeks a pay increase for members of the judiciary and sets personal rights for prosecutors and judges. The bill will change the five-year restriction of the judge and prosecutor exam and reduce the time limit to two years.

In light of the bill, the Justice Ministry will have an organization set up abroad in line with the bill. The judicial amendment also seeks to do away with the Judicial Year Opening Ceremony.