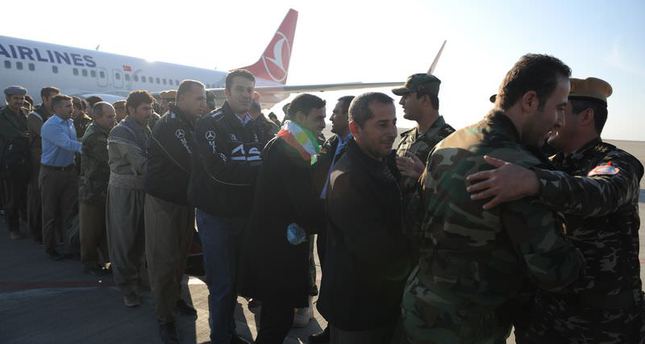 by Daily Sabah with AA Dec 04, 2014 12:00 am
The first batch of Iraqi Peshmerga forces that were sent through Turkey to fight in the Syrian town of Kobani in October have returned to Iraq, official sources said.

According to sources, peshmerga forces arrived at Irbil International Airport via a private plane from Turkey's southeastern Şanlıurfa province on Thursday.

The Iraqi peshmerga fighters in Kobani are fighting alongside Syrian Kurdish groups against the self-proclaimed Islamic State of Iraq and al-Sham (ISIS) militants. The Iraqi army and peshmerga have been battling ISIS in Iraq since mid-June, when the militants took control of Mosul, the second largest city in Iraq. The militant group is now said to be in control of large swathes of territory in Iraq and Syria.

A fresh contingent of KRG peshmerga troops arrived in Şanlıurfa to replace an existing unit in the Syrian town of Kobani on Tuesday.

Turkey had allowed the passage of 150 Kurdistan Regional Government (KRG) peshmerga fighters to enter Kobani through its borders on October 29 to fight alongside Kurdish groups battling ISIS militants in accordance with the October 2 troop mandate, to demonstrate Ankara's continued efforts to assist in putting an end to ISIS's siege of Kobani.

The new batch also consists of around 150 fighters who were flown in a private plane from Iraq's Irbil International Airport to Turkey's Şanlıurfa Airport Tuesday mid-afternoon. The entire route of the convoy was closed to traffic as it traversed the province's main highway. According to reporters at the scene, the new unit is equipped with the latest weapons and ammunition.

Most of the fighters battling ISIS in Kobani are members of the YPG – the armed wing of the PKK's Syrian affiliate, the Democratic Union Party (PYD). For this reason, Turkey has some reservations about the U.S. resupplying the YPG in Syria.

Ankara has been strongly against supporting what it sees as a terrorist organization, given that the weapons provided to the organization could under certain circumstances be used later against Turkey. Assessing the risk, Ankara began seeking alternative ways to contribute to the anti-ISIS coalition, such as proposing that the U.S. administration officially support recognized armies like the peshmerga and the FSA instead of the YPG.

The ISIS siege of Kobani has turned into a test for the U.S.-led anti-ISIS coalition that began launching military strikes in early October to halt the ISIS advance. The coalition has conducted over 150 airstrikes on ISIS militants besieging the town. According to U.S. officials, the airstrikes have killed hundreds of militants, but neither the military action nor the coalition's resupplying of YPG fighters by airdrop has yielded the expected results yet.