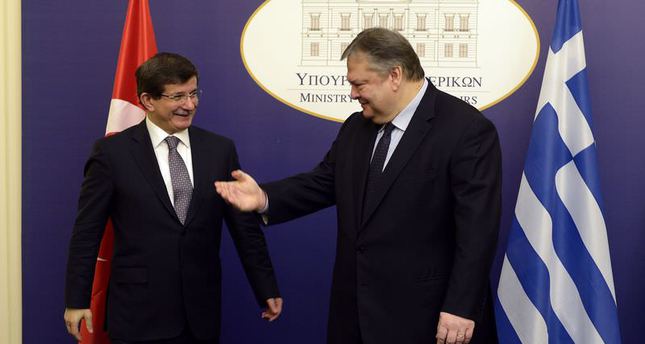 by Fatih Şemsettin Işık Dec 04, 2014 12:00 am
Prime Minister Ahmet Davutoğlu will visit Greece for two days beginning on Friday amid tensions over energy deposits in the Eastern Mediterranean.

Davutoğlu will co-chair the third Turkey-Greece High-Level Cooperation Council meeting along with Prime Minister Antonis Samaras of Greece. The two-day talks between Turkey and Greece are part of confidence-building measures launched in 2010 to improve relations between the Aegean neighbors. So far, the talks have resulted in the signing of around 50 accords on immigration, disaster response, tourism, health, transport, agriculture, immigration, culture and sports.

The visit comes at a time when Turkey and Greece are said to be at odds over the divided island of Cyprus and peace talks to resolve the issue have stalled.

Greek Cyprus suspended the talks over the divided island on October 7 when Turkey sent a warship to monitor a Greek Cypriot oil and gas exploration mission off the southern coast of Cyprus, which is in Greek Cyprus's Exclusive Economic Zone.

One of the likely topics on the agenda of the visit is the issue of reopening the Halki Greek Orthodox Seminary on Istanbul's Heybeliada, one of the Prince's Islands. President Recep Tayyip Erdoğan recently said that the seminary could be re-opened if Greece improves the religious affairs of Muslims in Greece and commented on the issue of building a mosque in Athens as it is one of the few European capitals that does not have a mosque.

Regarding Davutoğlu's visit, Dr. Leonidas Karakatsanis, a post-doctoral fellow at the British Institute at Ankara, stressed that the summit is an opportunity for ensuring "already existing positive developments to develop by lifting such blockage" and the urgency of taking civil societies into account as the real interlocutors.

He said: "Greece has been extremely slow in reacting to the growing need for a place of worship for the hundreds of thousands of Muslim immigrants and citizens living in its capital, but the pressure from progressive segments of civil society and the positive stance of the municipality of Athens seemed to have opened the way to the process.

"Similarly, in Turkey, following the 2005 TESEV [the Turkish Economic and Social Studies Foundation] report, 'Discussions and Recommendations on the Future of the Halki Seminary,' a similar pressure had succeeded to connect the re-opening of Halki with the wider democratization reforms as part of repairing old injustices against the minorities. … The imposition of 'protectors' – Turkey appearing as the protector of the entire Muslim population of Greece, or Greece as the 'protector' of the Patriarchate – distorts the actual fact that the resolution of those 'problems' is related with very essential changes needed, independently, in both Turkish and the Greek societies."

Established in 1844 for training Greek Orthodox clerics, the opening of the Halki Seminary remains a thorny issue in terms of rights of minorities in Turkey. The seminary, which has been a source of dissidence for decades, was shut down in 1971 under a law banning religious training by non-state entities.

Ioannis Grigoriadis from Ihsan Doğramacı Bilkent University's Department of Political Science and Public Administration thinks that progress in economic ties brings forth favorable influence. "This is a very welcome development, which is hoped to generate a positive spillover in 'high politics' issues. Particularly important is the rise of tourism on a bilateral level. Millions of Greeks visit Turkey and millions of Turks visit Greece. This helps build bridges across the Aegean," he said.

The summit will also be the third one after it had its first meeting on May 14, 2010 in Athens. The previous meeting of the High-Level Cooperation Council was held in Istanbul on March 4, 2013.

In 1974, an attempt was made by Greek Cypriots to forcibly join the island to mainland Greece through a union via an attempted coup. This was resisted by an armed Turkish force in accordance with the 1960 Treaty of Guarantee. Consequently, Turkish Cypriots set up their own state in the north of the island in 1983, recognized only by Turkey, while continuing the search for reconciliation.