Turkey and US move closer towards Syria no-fly zone 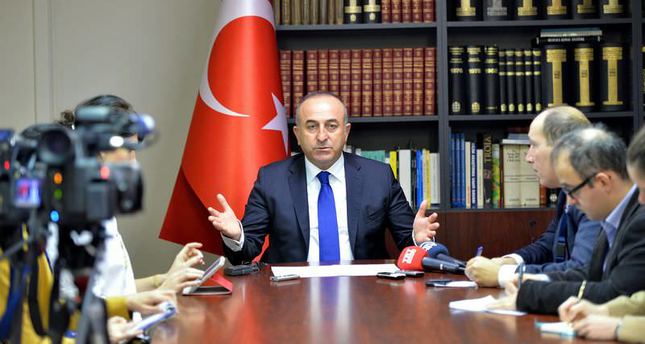 by Daily Sabah Dec 04, 2014 12:00 am
Turkey and the U.S. are getting closer to an understanding on establishing a no-fly zone and a safe haven in northern Syria, Foreign Minister Mevlüt Çavuşoğlu said in Brussels on Wednesday. On the same day U.S. Secretary of State John Kerry asserted that no decision has been taken yet.

"There's a lot of discussion going on about the way we will go forward. But it is premature to suggest at this moment of time that we are close to making a decision or moving forward with any form of a safe zone or a buffer-zone at this moment in time," Kerry said at NATO headquarters in Brussels.

Turkey has long pushed for a buffer-zone inside Syria to shelter Syrian civilians from attacks by both the Syrian President Bashar Assad's regime and the Islamic State of Iraq and al-Sham (ISIS), but the U.S. has so far been reluctant.

Turkey has given shelter to over a million Syrians, who have placed a huge burden on its national exchequer. Çavuşoğlu is in Brussels to attend a NATO foreign ministers meeting. The Turkish foreign minister said Tuesday that the number of countries supporting the creation of a no-fly zone was rising.

He also said that the international coalition's airstrikes against ISIS were not efficient and there was a need for a more comprehensive strategy. He also called for the equipping and training of the Free Syrian Army (FSA).

Almost one year since ISIS took control of areas in Iraq and Syria, politicians and diplomats from more than 60 counties and international organizations met in Brussels to discuss the strategy against the terror group.

Kerry's comments appear to be another attempt this week by the Obama administration to make clear its position regarding a buffer-zone that has been pushed by Turkey.
The Wall Street Journal reported Monday that the U.S. and Turkey have come close to an agreement on using the İncirlik Air Base in southern Turkey, and other air bases, to patrol a zone in Syrian alongside Turkish border, which would be off limits to Assad's regime forces.

Bloomberg news also claimed that the U.S. envoy leading the anti-ISIS coalition, Gen. John Allen, negotiated an "air-exclusion zone" inside Syria along the Turkish border that would be protected against ISIS and Assad's forces

Following the reports, the administration seemed to fumble its response with different officials issuing contradictory statements.

"On the issue of the no-fly zone and so forth, the United States remains extremely engaged in its discussions with Turkey," Kerry said. "We are continuing our discussions with our Turkish allies in order to have conversations about how we should best bolster security in the region and deal with the problem of Syria," he said.

The Turkish government has insisted on the establishment of a no-fly zone to halt attacks by the Assad regime on Syrian opposition forces. Turkey also wants to establish a safe haven near the Turkey-Syrian border for refugees fleeing ISIS attacks in Syria.

A U.S.-led airstrike campaign was launched on Aug. 9 against ISIS targets in Iraq, with the support of France, the U.K. and Belgium, along with Saudi Arabia and the United Arab Emirates.