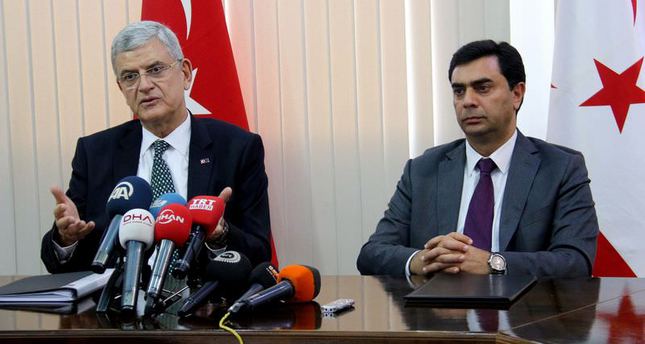 by AA Dec 04, 2014 12:00 am
Turkey is determined that the natural resources off the southern Cyprus coast belong to the whole island, Minister for EU Affairs and Chief Negotiator Volkan Bozkır said on Wednesday. During his one-day visit to Nicosia, Bozkır met with Turkish Cypriot President Derviş Eroğlu and Foreign Minister Özdil Nami at the presidential palace.

Bozkır said that ongoing explorations of natural resources off the southern Cyprus coast by the Greek Cypriots was contrary to international law since it did not take into account the rights of Turkish Cyprus.

Greek Cyprus suspended talks with Turkey in October after Turkey sent a warship – the Barbaros Hayrettin Paşa – to monitor an oil and gas exploration mission off the southern Cyprus coast.

Turkey and the Turkish Cyprus have strongly opposed any unilateral move by Greek Cyprus to explore any hydrocarbon resources around the island, saying its natural resources should be exploited in a fair manner under a united Cyprus.

The Turkish Cypriot government has repeated its firm stance on several occasions that the resources off the island of Cyprus belong to both communities, and that Turkish Cyprus would not give up their rights to the resources.

"The Barbaros Hayrettin Paşa will continue its monitoring mission as long as Turkish Cyprus demands it," Bozkır added.
Bozkır also met with parliamentary speaker of Turkish Cyprus Sibel Siber during his visit.

Senior Turkish and Greek officials will meet during the third edition of the High-Level Cooperation Council in Athens on December 5-6.

Turkey must successfully conclude negotiations with the EU in 35 policy chapters, which involve reforms and adoption of European standards to attain EU membership. Since 2005, Turkey has been negotiating 14 chapters.

Only one chapter has been opened in the last three years, mainly due to the Cyprus issue and Greek and French oposition.