US envoy to Ankara thanks it for support to Syrian refugees 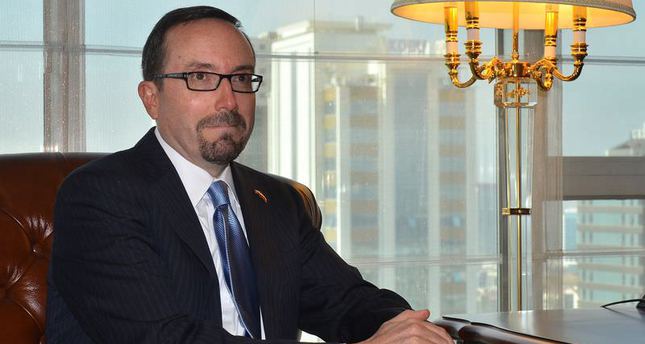 by Daily Sabah Dec 05, 2014 12:00 am
U.S. ambassador to Ankara, John Bass, said in his visit to the southeastern city of Adana that most of the U.S. aid to refugees from the civil war in Syria is done with the support of Turkish government.

During his visit to Adana, Bass paid a visit to Adana Mayor Hüseyin Sözlü and touched on the humanitarian crisis in Syria and refugees taking shelter in Turkey.

Explaining that the Syrian crisis has been discussed intensely between Turkey and the U.S., the ambassador thanked Turkey for the support they have provided to the people fleeing Syria due to the civil war.

Bass also visited Turkey's İncirlik air base, a key installation within 160 kilometers of the Syrian border and touched on the strategic importance of the base in terms of the regional crisis.

The U.S.'s request to use the air base in the U.S.-led anti-ISIS coalition fight against the Islamic State of Iraq and al-Sham (ISIS) was discussed in the meeting with Turkey. Ankara listed three demands of its own to allow the anti-ISIS coalition to use the base: training and equipping Syrian opposition groups and establishing a no-fly zone as well as a safe zone for humanitarian purposes.

Highlighting the deep-rooted relations between Turkey and the U.S., Bass reportedly said that in the light of the developing political atmosphere and regional issues, Turkey appears to look for closer allies or has already found one.