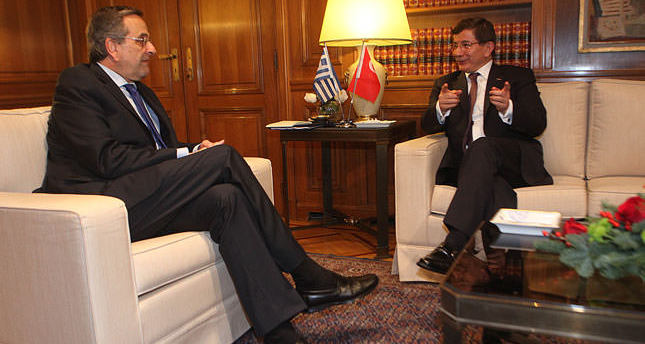 Prime Minister Davutoğlu, accompanied by nine ministers, visits Greece to discuss bilateral ties, the economy and the divisive Cyprus issue. Before departing, he said the two neighbors can turn the Aegean into a sea of peace

Prime Minister Ahmet Davutoğlu said on Friday that his two-day official visit to Greece will allow Turkey and Greece to discuss economic and political relations.

"We will also discuss the joint steps to be taken within the context of Cyprus and the Aegean Sea," he told a press conference at Istanbul Atatürk International Airport on Friday afternoon, before departing for the Greek capital Athens.

Turkey and Greece are the guarantor countries for the disputed Mediterranean island of Cyprus. Both Turkish and Greek Cypriots are trying to find a way to settle the decades-long conflict.
"As two neighbors, we will continue our efforts to turn the Aegean Sea into a sea of peace," Davutoğlu added.

Negotiations between Turkish Cyprus and Greek Cyprus had resumed after a two-year break in February 2013. However, Greek Cyprus suspended the talks over the divided island on October 7 after Turkey sent a warship to monitor an oil and gas exploration mission off the southern coast of Cyprus. Both Turkey and Turkish Cyprus have called for a fair division of resources between both sides.

Davutoğlu stressed that Turkey is an open country, has a rising economy, and would like to boost collaboration with Greece in tourism: "Cooperation in tourism between Greece and Turkey is of vital importance."

Davutoğlu is to also meet Greek President Karolos Papoulias. He will also hold talks with Turkish-origin Greek citizens and representatives of the Turkish minority in Greece.

Davutoğlu and Samaras are also scheduled to deliver a speech at the closing of the Turkish-Greek Business Forum and attend a dinner that the Greek premier will host in his Turkish counterpart's honor.

Turkey is opposed to any unilateral move by Greek Cyprus to explore hydrocarbon resources around the island. It insists the island's natural resources should be exploited in a fair manner by a united Cyprus.

Talks over the future of the island remain dogged by the small country's troubled past. In 1960, a Treaty Concerning the Establishment of the Republic of Cyprus – commonly known as the Treaty of Guarantee – was signed between Turkey, Greece and the U.K. The treaty banned the island of Cyprus from participating in any political or economic union with another state as well as requiring other parties to guarantee its independence, territorial integrity and security.

However, in 1963, only three years after the treaty was signed, Turkish Cypriots were ousted by force from all institutions of the new republic by their Greek Cypriot partners, which violated founding agreements and the country's constitution.

Thereafter, Greek Cypriots claimed to represent the Republic of Cyprus, a move considered illegal by Ankara and remains unrecognized by Turkey. Between 1964 and 1974, the international community made several attempts of peacemaking, all of which ended in failure.

In 2004, Cypriots went to the polls to decide on the Annan Plan, which was a U.N. proposal to resolve the dispute by restructuring the island as a United Republic of Cyprus. In effect, it proposed a federation of two states that aimed to unify the Turkish Cypriot and Greek Cypriot communities.

*Wires contributed to this report