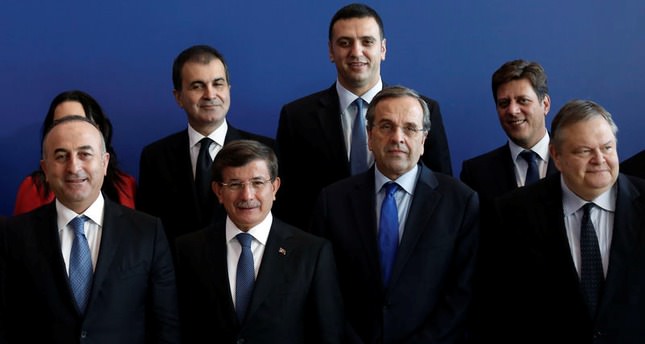 by AA Dec 06, 2014 12:00 am
Turkish Prime Minister Ahmet Davutoğlu said on Saturday that relations between Turkey and Greece are no longer impeded by a psychological barrier.

"Now they are not only speaking with their tongues but also from their hearts to each other. This is a significant step," Davutoglu said, at a joint press conference with his Greek counterpart Antonis Samaras, following the third meeting of the Turkey-Greek High Level Cooperation Council in Athens.

"We are committed to no longer allowing certain taboos or patterns in our minds about the ties between Turkey and Greece, but to open all doors between the two countries in the future," he said.

The new openness helped the ministers from both sides to speak without any fear of being misunderstood, Davutoğlu said.

Davutoğlu added that both sides saw the advantages of working together.

"For example, our transportation policies in the Aegean Sea will complete each other. We are building the Canakkale Bridge between the two countries, and it will provide the best route from the Greek island of Lesbos to northern Greece," he said.

Davutoğlu pointed out that Ankara's and Athens' energy policies also complete each other, as the energy corridors of the two countries are being connected through projects like the Trans Anatolia Natural Gas Pipeline, and the Trans Adriatic Pipeline.

TANAP is projected to transport natural gas from the Azerbaijani Shah Deniz 2 field on the Caspian Sea and other Azerbaijani fields, through Turkey to Europe. The Trans Adriatic Pipeline, will connect with TANAP on the east side of the Greek-Turkish border, and will cross to northern Greece, Albania and the Adriatic Sea to connect with the Italian natural gas network in southern Italy.

"Once the Cyprus issue is resolved, we will continue to work shoulder to shoulder with Greece on the East Mediterranean energy corridor, and to cooperate in trade, customs policies, investment, culture and tourism," said the Turkish premier.

He also touched on the solidarity between the two neighbors in culture, ranging from cooperative restoration of Ottoman artifacts in Greece and Christian works in Turkey to enable the return of historical artifacts to their original homes.

The meeting takes place amid tension over Cyprus due to a dispute about energy resources on the divided island.

Greek Prime Minister Antonis Samaras said that the two ministers had made a broad review of the work that has been done in the last four years.

"We have signed 47 cooperation agreements, and we have agreed to work towards the implementation of those agreements."

"Our aim is the promotion of the cooperation in areas that are not politically sensitive, but that touch citizens' everyday life," Samaras said. "In the relations between our two countries, there are issues on which we disagree. We recognize this, and we are creating relations of mutual respect with full deference to international law and to safeguarding national sovereignty," he added.

Samaras also addressed the issues regarding Cyprus, and said that Greece continued to support the UN's efforts for a just and viable solution through negotiations between the two communities.

We understand Greek Cypriot leader Nicos Anastasiades' decision to interrupt the negotiations until the problem that has occurred is solved, he said. I believe that the problem will be solved soon and the talks will restart, he added.

The Greek premier also voiced Athens' support for Turkey's European accession process as his government would find it useful for their neighbor join the European Union.

"Turkey may be certain that it will have huge benefits from its EU accession," Samaras said.