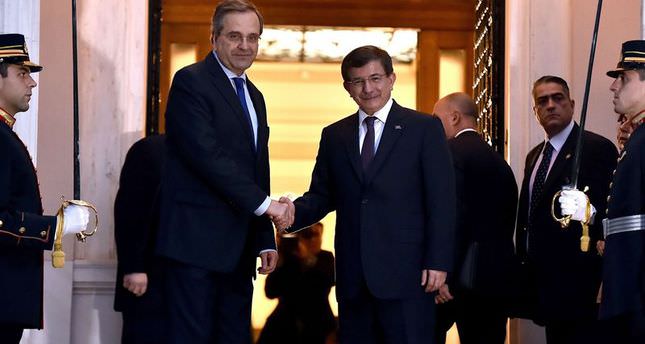 by Dec 07, 2014 12:00 am
Prime Minister Ahmet Davutoğlu has said his two-day official visit to Greece was effective, as both sides discussed the ways to increase economic cooperation and bilateral ties. He made the comments to Daily Sabah's Kılıç Kanat Buğra and Sabah's Yahya Bostan on his way back to Turkey from Greece.

"We arrived in Greece with nine ministers and there was no psychological barrier [between the countries]. We talked about how we can develop transportation projects such as a bridge to be built over Gallipoli and a high-speed train between Istanbul and Thessaloniki. Both countries are determined to evaluate each other's potential and take steps regarding energy policies and investment in tourism," Davutoğlu said.

Highlighting that he held talks with opposition parties in the country in addition to senior governmental figures, he said that Turkey witnessed similar hard times that Greece is experiencing when the Justice and Development Party (AK Party) came to power, but a political perspective was drawn in line with the Turkish public's demands.

"I advise Greece to seriously consider what the political figures offer to the public if they want Greece to be powerful," added Davutoğlu. On the disputed Mediterranean island of Cyprus that Turkey and Greece are guarantor countries, Davutoğlu said that the countries agreed to develop a joint formula to revive the stalled peace talks in line with the share of the island's natural resources.

"Of course, these are not issues to be finalized in one setting, but there is a common will on both sides to progress the talks toward a positive agenda," Davutoğlu added, reiterating the effectiveness of the visit.

Davutoğlu said Turkey called for comprehensive planning to expedite the negotiations over the reunification of the island, and a new government to be established after the reunification would be able to further survey and research its natural resources.

He added that if a delay occurs in the reunification on the island, a joint commission may be established by Turkey and Greece who will oversee research on offshore drilling. "Both sides realized that it is not possible to drill and manage the resources by only one side. Now, a opportunity for negotiation over how to conduct these studies has presented itself and Turkey and Greece have the will to cooperate," Davutoğlu said.

"An approximate solution is on the agenda, but let me not mention it for now. In the upcoming days, there will be a meeting on the issue," he added.

When asked about allegations that Turkish President Recep Tayyip Erdoğan is at odds with the prime minister recently, Davutoğlu refuted these claims, saying, "These allegations are not unexpected since there has been efforts to create a rift within the AK Party after Gezi Park protests."

Accusing some circles of trying to create a chaotic situation within the AK Party, Davutoğlu reinforced his long-continued acquaintance with Erdoğan and said they overcame hard times together before and are both immune to allegations that seek to see a division between them.

He also discussed Turkey's and the U.S.'s stance toward the Bashar al-Assad regime and Syrian civil war. He said the countries are in intensified talks regarding Assad and added that divergence has reduced between the countries, as Turkey's concerns are becoming more understood each day.

Davutoğlu said the two countries are in agreement that eliminating the Islamic State of Iraq and al-Sham (ISIS) is not enough to stabilize the troubled country of Syria, and the violence of Syrian regime should also be removed.