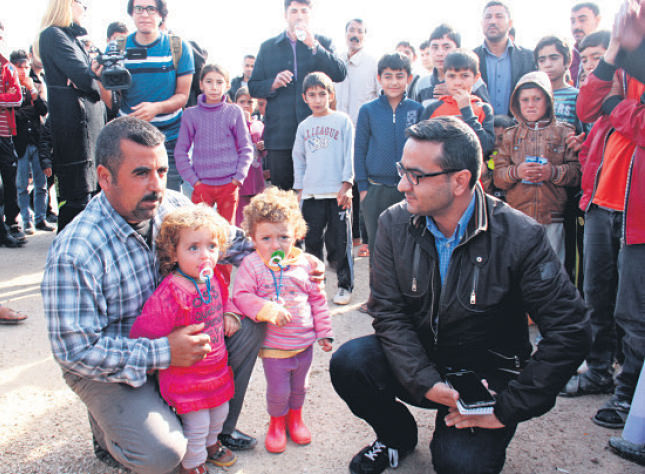 Yazidis are a small and vulnerable religious minority that has lived in Iraq's Sinjar region and Nineveh plains in peaceful coexistence with Muslims and Christians for centuries.

However, Yazidis are currently in danger of facing extinction after the extremist terrorist group, the Islamic State of Iraq and al-Sham (ISIS), took control of Mosul, Shengal and other nearby cities.

After ISIS attacked Shengal and the surrounding area in August, 10,000 Yazidis fled to areas controlled by the Kurdistan Regional Government (KRG) and Turkey.

However, many of them did not manage to escape and were killed during the occupation and several hundred families were captured, leading many men and boys to be killed and women and girls to be enslaved.

Amid this tragedy, refugee camps where people fleeing the conflict can find food and shelter often provide their only relief.

"We're doing our best for the people who left everything behind and have only a little hope for their future," Saed Musda Nejmi, the manager of a refugee camp in the Sharia district of Dohuk, said.

Musda Nejmi is a Yazidi who previously worked as a court clerk in Dohuk, but was assigned to run the camp that was built by Turkey's Directorate of Disaster and Emergency Management (AFAD) a few weeks ago. "In this camp, there are 23,000 Yazidis who escaped from [ISIS] terrorists. All of these people are grateful to Turkey for proving shelter and helping them in their most difficult times," Nejmi said. AFAD has built two refugee camps in the Zaho and Dohuk districts of the KRG, which accommodate up to 40,000 internally displaced people (IDP). According to KRG officials, there are almost 2 million IDPs in KRG controlled areas and amid the conflict and financial difficulties, the KRG has been trying to establish camps to provide shelter for refugees.

Turkey is already hosting more than 1.6 million refuges that have fled their homes since the outbreak of the Syrian crisis and AFAD has been operating 22 refugee camps across the country. Additionally, the establishment of these camps demonstrate how AFAD has moved its unique experience for refugees that has been praised by the world beyond Turkey's borders.

"This camp also serves as a good example of positive relations between the KRG and Turkey," Nejmi added while giving detailed information about the camp. The camp includes 4,000 tents with each tent designed to accommodate a family in hot or cold weather.

Bathroom and shower facilities are also included on the premises. The tents are fire resistant and electricity is provided. "I've been living in this camp for three weeks with my wife and twin daughters. Before that, we stayed at a school in Dohuk and compared to the school, our condition in the camp is quite satisfactory," Hassan Ihsan, 41, said while holding the hands of his 2-year-old twin girls, Ferah and Fırrah.

"We have food, water and electricity in this camp. Of course, it's not our house and there are some shortcomings, but I thank Melek Taus [the Peacock Angel] for being here," Adus Hırmız, 40, said while watching a Kurdish soap opera on his TV in his tent via a satellite dish.

Last week, AFAD transferred management of the camp to KRG officials, and currently there are nine administrative officers and 22 police officers managing the administration and security of the camp. Meals for 23,000 people are prepared in the Dohuk city center 10 kilometers away from the camp and the Barzani Charity Foundation is the main aid organisation that is responsible for food expenditures.

"We are committed to providing the best available services to IDPs across the region, which is why AFAD crews constructed two camps in the [Iraqi] Kurdistan region within a matter of months. The facilities are equipped with state-of-the-art infrastructure, electricity and water as well as designated spaces for medical clinics, classrooms and lounge areas. The idea is to give the residents a genuine opportunity to get back on their feet." AFAD spokesman Doğan Eşkinat said.

The Turkish government became the third largest international donor after the U.S. and the U.K. in 2013, accounting for 7.3 percent of total humanitarian assistance according to the 2014 Global Humanitarian Assistance Report.