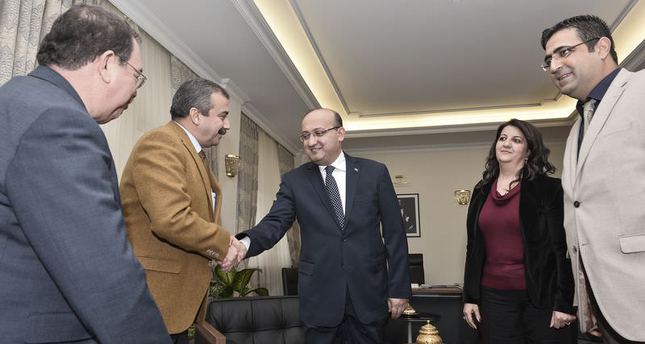 by Daily Sabah Dec 08, 2014 12:00 am
HDP's Istanbul Deputy Sırrı Süreyya Önder has stated that there are no problems with expanding the number of members in the İmralı Committee.

He made the statements at a press conference held on Monday, following a meeting between Deputy Prime Minister Yalçın Akdoğan and Peoples' Democratic Party's (HDP) İmralı committee, who pay occasional visits to PKK's imprisoned leader Abdullah Öcalan in İmralı Prison.

Önder noted that the current situation is not a process of wasting time and they would not allow for such thing to take place.

The HDP Committee also touched upon the issue of teaching Ottoman-Turkish and stated that they would not object the teaching of any language or alphabet. They emphasized that the same sensitivity and attention must be paid to all languages that are spoken in Turkey.

The İmralı committee recently released a statement following their visit to the PKK's imprisoned leader Abdullah Öcalan in İmralı Prison and said they are expecting to reach a serious democratic conclusion of the Kurdish reconciliation process within the next five months.

According to the statement, Öcalan underscored the importance of creating legal guarantees for the upcoming stages of the reconciliation process to establish permanent peace and democracy. He said that the democratic resolution of the process would set a precedent for the Middle East and that the failure to continue in a serious and determined manner would deepen the chaos in the region and pave the way for coups in the future. Öcalan also emphasized the importance of creating a monitoring board to carefully watch and inspect the cease-fire process and argued the only way to permanently preserve public order is with an independent board.

It was also noted that the draft negotiation plan entitled "The Peace and Democracy Negotiation Process Draft" would be shared with the public while Öcalan said both parties discussed the framework in detail and agreed on a framework regarding the plan.

The Turkish government initiated the "reconciliation process", followed by a series of democratic reforms, to improve the rights of Turkey's Kurdish population. The İmralı Committee was established as part of the reconciliation process to bring an end to the thirty-year old conflict in Turkey through holding talks between the pro-Kurdish HDP and PKK's imprisoned leader Abdullah Öcalan in İmralı.

Recently, the government has established the "Reconciliation Process Committee" in an effort to draw a roadmap for the steps and precautions that will be taken by the government and for the development of effective strategies and policies to put a permanent end to terrorism in the country.