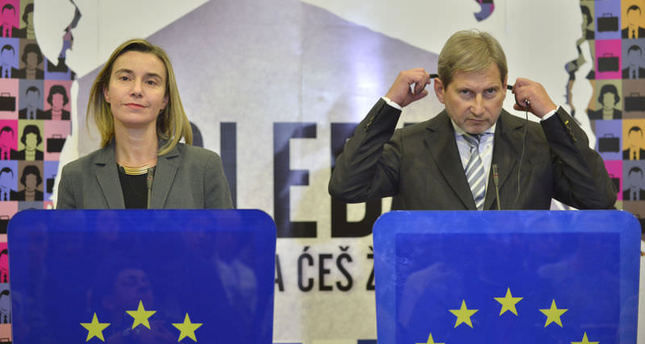 by AA Dec 08, 2014 12:00 am
Turkey's European Union accession process will be the EU Commission's top priority during their visit to Turkey, the EU's foreign policy chief said over the weekend.

The High Representative of the EU for Foreign Affairs and Security Policy, Federica Mogherini, spoke to The Anadolu Agency before her Monday visit to Turkey.

"Our top priority will be Turkey's EU accession process," Mogherini said. "We aim to work with Turkish government officials to give the process a concrete step and move forward."

Commissioner for European Neighborhood Policy and Enlargement Negotiations Johannes Hahn and European Commissioner for Humanitarian Aid and Crisis Management Christos Stylianides as well as Mogherini herself will visit Ankara on Monday.

Hahn and Stylianides will also head to Turkey's southeastern province of Gaziantep, where more than 33,000 Syrian refugees have taken shelter in four different camps.

Mogherini also underscored that Turkey and EU relations are "critical" in terms of the region's security and stability.

"We are both concerned about the Mediterranean and Middle East region. Because of Turkey's G20 term presidency, they and the EU need to act together during the peace process in Syria and the Middle East," Mogherini said. "The EU realizes that Turkey has a critical role in the region and will work accordingly to provide peace and stability there."

Mogherini also highlighted Turkey's chances of entering the EU, saying that according to public opinion, support for Turkey's membership is over 50 percent.

"We should improve this statistic," she said. "I hope that not only the Turkish government, but also the Turkish people, embrace that Turkey's accession to the EU is not only beneficial for Turkey, but also for the EU as well."

Mogherini also commented on the President of the European Commission's statements on not letting new members join the EU for five years, saying that the important point was to work on becoming a member.

Jean-Claude Juncker said in a statement published on the European Commission's website that the EU needed a break from enlargement so that it could consolidate what had been achieved.

"This is why, under my presidency of the commission, ongoing negotiations will continue, and notably the Western Balkans will need to keep a European perspective, but no further enlargement will take place over the next five years," the statement quoted him as saying.

"The EU will continue to increase its aid to these refugees in Turkey," she added.

Turkey is first in the world in the provision of humanitarian aid, according to a 2013 report released by the Turkish Cooperation and Coordination Agency on Sunday.