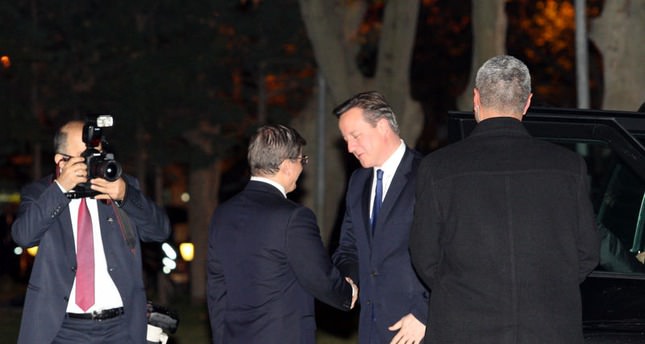 by AA Dec 09, 2014 12:00 am
British Prime Minister David Cameron arrived in Ankara on Tuesday evening to discuss a host of bilateral issues, including measures to stop the flow of British fighters into Syria and Iraq through Turkey's borders.

Cameron's discussions in the Turkish capital are likely to focus on the fight against the Islamic State of Iraq and al-Sham terrorist group, and actions of Syrian President Bashar al-Assad.

The visit comes weeks after the British premier said Britain had to take action to deal with the threat posed by "foreign fighters planning attacks against our people ... we will continue to do everything we can to keep our country safe."

The British government has said that up to 500 Britons have traveled abroad to participate in fighting in Syria and Iraq, and more than 200 have been arrested on their return to the U.K. on suspicion of terrorism.

British Prime Minister's first stop will be the Prime Ministry, where he and Ahmet Davutoğlu will have a bilateral meeting and then hold a press conference.

During his first visit in 2010, the British prime minister said he would "fight" for Turkey's EU membership and added that he was "angry" at the slow pace of negotiations.

The U.K. supports Turkey's accession to the EU as long as the accession criteria are met.

Cameron's visit coincides with that of Federica Mogherini, the High Representative of the EU for Foreign Affairs and Security Policy, who will visit a refugee camp on Turkey's southern border and hold talks with Turkish officials Tuesday.

Sinan Ulgen, Chairman of the Istanbul-based Center of Economics and Foreign Policy Studies, said "Cameron's visit to Turkey is an important move for both Turkey and the EU."

"The Syria situation and the ISIS will be the main agenda of the meeting; Cameron will demand more support from Turkey in the fight against the ISIS," Ulgen said.

He also said that the suspended talks between Turkey and the Greek Cypriots might also be in the agenda of discussions between the two leaders.

Ankara may ask European countries to put pressure on the Greek side to resume talks, he added.

Cameroon is expected to seek a trade balance between Turkey and Britain. Turkey's exports to the U.K. reached $9.93 billion this year.

In 2013, the trade between UK and Turkey reached $15 billion, according to the Turkish-British Chamber of Commerce and Industry.

Samuel Tombs, a British economist at Capital Economics, said the U.K. wanted to boost its economy and increase its exports to Turkey.

"The U.K. also wants to secure economic cooperation with developing countries out of the EU, such as Turkey," Tombs added.

The average growth rate in the last decade was five percent, the fastest among the Organization for Economic Cooperation and Development countries, which grew at an average of 1.7 percent.

The OECD organization estimates that Turkey will be the third highest growing country after China and India by 2017, and may surpass India after 2017 to be at number two.