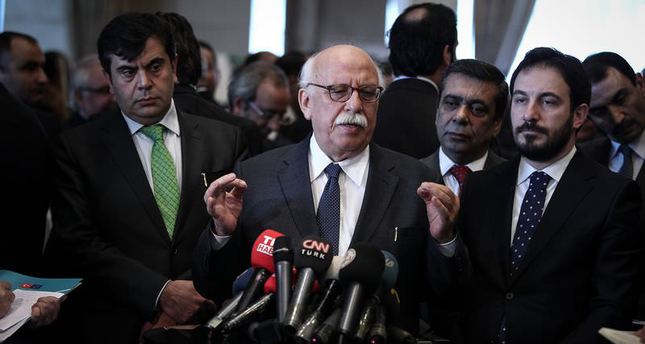 by Daily Sabah Dec 09, 2014 12:00 am
National Education Minister Nabi Avcı, speaking at a press conference in Ankara about the latest controversy sparked by the recommendation that Ottoman language courses be made compulsory at secondary state schools, said that opponents should read some books to achieve a better understanding of the issue instead of treating it like a new subject.

The proposal, which sparked serious debates among politicians, was accepted by authorities at the 19th National Education Council on Friday. The decisions of the council, which is an advisory body, are not necessarily implemented, but President Recep Tayyip Erdoğan has voiced support for the measure.

"This topic is not new in Turkey. There have been many texts published on the issue in history. Our opposition and some columnists should form a common understanding with those who want to debate the matter," Avcı said.

Calling on those who participate in the discussions of the matter to form a list of must-reads, Avcı said they should do preliminary readings of the writers who previously discussed the issue.

"Refraining from clichés like the 'Middle Ages,' as if the topic is being discussed for the first time in Turkey, we should adopt a milder rhetoric while putting forth ideas on the subject." Avcı argued.

His statement came as a response to main opposition Republican People's Party (CHP) Chairman Kemal Kılıçdaroğlu who previously commented on the issue: "The Ottoman language will take us back to the darkness of the Middle Ages."

The statement was harshly criticized by Prime Minister Ahmet Davutoğlu who targeted the leader by saying Kılıçdaroğlu should leave such orientalist remarks to the West.

"Every time you call the Middle Ages the 'Dark Ages,' you insult the legacy of Hacı Bektaş Veli and Yunus Emre," Davutoğlu said, arguing that it is unsuitable for politicians to base their remarks on orientalist rhetoric. "The Ottoman language is Turkish," he claimed, noting that those who oppose the teaching of Ottoman act as enemies of their own history.

The Ottoman language, which was replaced with modern Turkish in 1928, divided council members including Ministry of National Education officials, educators, union members and other groups linked to education. Those in favor of Ottoman as a compulsory language subject defended the idea as a necessary move to have a better understanding of the region's 600-year Ottoman history as the birthplace and center of the Ottoman Empire.

The language, now mainly studied by academics alone, received varying reactions from opposition parties. The Nationalist Movement Party (MHP) and the Republican People's Party (CHP) were at odds over the compulsory language lessons, though they often take the same sides in strict opposition to government policies.

Özcan Yeniçeri, a prominent lawmaker from the MHP lauded the move: "Turkish youth should absolutely learn this language to understand what their forefathers went through, to benefit from their experience." Yeniçeri complained that intellectuals could not read Ottoman history from original sources. "This is a move that will enable people to understand their history," he said.

Despite a mostly positive reaction to the issue by the public, Akif Hamzaçebi, acting chairman for the CHP's party group in Parliament, claimed that teaching the Ottoman language would be "good only for reading old epitaphs." Hamzaçebi said the government should work for the translation of works in Ottoman into modern Turkish instead of teaching students Ottoman, which is no longer spoken.

In hard-hitting words, CHP deputy Hüseyin Aygün said on Tuesday that he would "never ever" allow his child to be taught the Ottoman language or Arabic.

"I would rather he fail the class," he was quoted as saying.
Similar sharp words came from Peoples' Democratic Party (HDP) Co-Chair Selahattin Demirtaş, who also recently participated in the debates voicing his opposition to the matter. He said in a harsh statement: "Even if your entire army forced it, I would not let my child attend Ottoman language classes."

"Objections to learning our ancestors' language are very dangerous," he said. "Ottoman will be taught in schools so the youth can learn their history, like it or not."

He explained that the Turkish people cannot read anything related to their history in its original language and remarked that everything from the past belongs to the Turkish nation and that the government will take all measures to ensure that everyone has access to reading Ottoman texts.

Meanwhile, the ministry began discussing who will be teaching the classes in question. A total of 150,000 teachers will reportedly be able to teach the language.