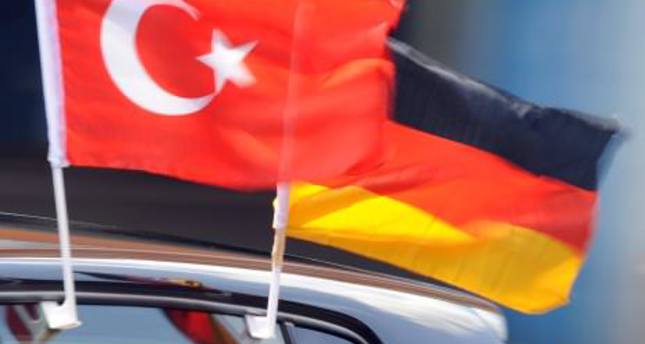 by Sena Alkan Dec 09, 2014 12:00 am
The sister party of the German Chancellor Angela Merkel's party in Bavaria, the CSU, has come under fire after drafting a proposal suggesting that migrants in Germany need to speak German both in public and at home. Receiving harsh criticism from some German politicians, German Turks and German citizens, the CSU backpedalled from the immigrant language policy.

The draft policy paper states that "People who want to remain in Germany on a permanent basis should be obliged to speak German both in public and within the family." The CSU parliamentary leader Gerda Hasselfeldt said that the party would have to rework the motion.

"We have to think again a little bit about the formulation," she said, but added that the basic idea contained in the motion was correct. The draft whipped up a storm among German Turks, with most of them describing the proposal as "anti-democratic and ridiculous." Half of Turkey's expats live in Germany, with their numbers reaching 3 million - constituting 3.7 percent of the Germany population.

Speaking on the condition of anonymity, R.K., a Turkish citizen who was born in Germany before returning back to Turkey to work, described the draft as "ridiculous."

"No one should decide which language people speak at home. This is a violation of personal rights. As I remember, this kind of law was applied in Turkey during the single party regime. They pushed citizens to speak Turkish and banned Kurdish, and that move paved the way for the outlawed PKK due to the pressure on the people," he said, adding that, in reference to 3 million German Turks, this draft is an attack on Turkish culture and a sign that Germany does not tolerate German Turks. Esma Bilekkaya-Salih, a manager of a private company in Germany, said that in some houses in Germany, family members speak four languages, adding, "They are not aware how different their [Bavarian] dialect is as well."

Şebnem Klink-Zeren, a German Turk who works as a lawyer, said that the draft paper is a joke and added, "But, it is a serious issue at the same time. Both the German and the international media reacted harshly to the draft. Politicians in different wings also stand against it." A Turkish student, Rukayye Şimşek was born in Germany and has lived there all her life, speaking both Turkish and German at home. In her opinion, it is easy to hear that her spoken German is better than her Turkish. She said that the draft is "completely ridiculous."

Not only German Turks, but also German people reacted to the draft paper. "The proposal from the CSU is a poor attempt to get votes from very conservative and right-wing Germans. The CSU's voters are mostly based in Bavaria, where many people speak with a very strong Bavarian dialect, which is sometimes hard to understand, even for Germans. I'm quite sure the CSU would never tell the Bavarian voters to stop speaking Bavarian and start speaking German at home," said a German citizen Daniel Krause, who lived in Berlin.

Krause added, "In my opinion, this is totally wrong and no help at all when it comes to trying to integrate immigrants into Germany. And it is an offence to so many people, who learn the German language already."

The proposal also fueled a heated debate on Twitter. A German-Turkish girl, İlknur, said on her Twitter account: "I speak German, English, Turkish, Kurdish & Arabic what about u CSU? Oh and Bavarian of course."

According to a report by the OECD, Germany is the main destination for migrants among EU countries. While the increasing number of migrants raises questions about how foreigners will integrate into Germany society, the low birth rate and ageing population in the country pose a risk to the economy. It is due to the this fact that Germany is desperately in need of migrants to overcome its demographic crisis.

On the other side of the coin, researchers in Germany stated that German Turks in the country have started to forget about speaking Turkish because they are exposed to German in their daily lives. According to Erhan Temel, a Turkish academic in Germany, the language that German Turks speak is "D-urkish" – a blend of Deutsch and Turkish — as they make unconscious language switches while speaking.