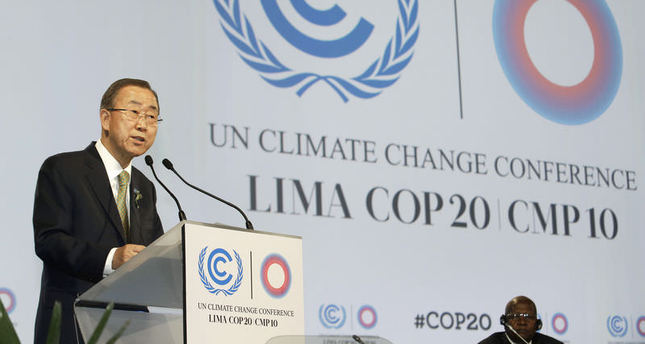 by AA Dec 10, 2014 12:00 am
Turkey expects UN climate talks this week to make "substantial progress" toward reaching a global pact, with it part of the international effort to curb climate change, its head of delegation told The Anadolu Agency (AA).

Turkey will submit "nationally determined" plans by next March to reduce greenhouse gas emissions, Mehmet Emin Birpınar, Deputy Undersecretary in the Ministry of Environment and Urbanization confirmed on Monday.

But any new deal must not consider it a "developed country," despite its membership of a grouping of industrialized nations, which would unfairly bind it to bear more of the burden, he said.

"As a country with no historical responsibility in climate change, we want this new regime to have enough flexibility to reflect our special circumstances and sustainable development needs," said the interim chief of the 60-strong delegation, before Environment Minister Idris Güllüce took over as ministers arrived Tuesday.

"What we expect from Lima is substantial progress compared to Warsaw [last year's so-called Conference of the Parties, or COP]," he added.

Delegates from almost 200 nations are working on a draft document at the two-week summit in Lima, which seeks to move beyond the Kyoto Protocol.

It will be negotiated and ratified next year in Paris, being the first treaty to combine rich and poor nations when it takes effect in 2020.

Nations have failed for more than two decades to achieve a durable agreement to prevent global temperatures from rising 3.6 F (2 C) on pre-industrial levels before the century's end-an increase deemed "dangerous" by UN scientists.

Global greenhouse gas emissions have to fall 40 to 70 percent by 2050 on 2010 levels to avoid going above the rise. Turkey hasn't yet confirmed by what date its emissions will fall.

"The flexibility and diversity in INDCs will certainly encourage parties to go beyond what they are currently doing," he added.

Turkey's contribution would focus on mitigation, and not adaptation as developing countries, such as the small islands states at threat from rising levels, have demanded.

It also supported accommodating "the changes that may happen in the future," leaving open a scale-up in commitments if swifter action to avert climate change was needed.

But no country "must be compelled to commit to mitigate more than itself determines and feels safe," to not endanger development, he said.

Turkey is a member of more than 40 industrialized countries in the so-called United Framework Convention on Climate Change's (UNFCCC) Annex I, based on its membership in the Organization for Economic Co-operation and Development.

That disqualifies it from accessing funds to prepare for climate change and obliges stricter commitments.

"I must repeat that being listed in Annex I of the convention does not mean you are a developed country party," said Birpinar, who is attending his third COP.

"What we request is paying special attention to the country party classification. It must be independent from the Annexes of the convention, as it is highly important for means of implementation in the context of the 2015 agreement in Paris."

Turkey is stepping up its efforts to reduce emissions, which have multiplied by a factor of two-and-a-half since 1990 as its population and economy have surged.

Greenhouse gas emissions rose from 180 million tons of carbon dioxide in 1990 to 439 million in 2012, according to the national statistics agency TURKSTAT.

Its population grew by more than a third to 75.6 million in the same period, while the economy expanded by 240 percent to $1.4 trillion in purchasing power parity terms between 2000 and 2013.

To combat this rise, Turkey will boost renewable energy up to 30 percent of production by 2023, investing in wind, solar and nuclear sources, Birpinar said.

Turkey has suffered from droughts as well as more erratic rainfall in the Anatolia region, Birpinar said. Up to 60 percent of agricultural land is at risk of erosion while half of its forests degraded, according to official statistics.

Reaching a climate agreement was therefore critical for the "sake of future generations," Birpınar said, adding Turkey's resolve to broker a "solid outcome" by the conference's close this weekend.

Turkey, however, came under criticism for its continued investment in coal-fired power plants, which the UN's scientific research arm, the Intergovernmental Panel on Climate Change, has called to phase out by 2100.

"The first and immediate thing that the Turkish government needs to do is to revise the plan to build 80 plus coal-fired plants in the country and to enable a massive renewable expansion," said Greenpeace in a statement to AA.

"Without such a step, any climate commitment, weak or strong, is just a worthless piece of paper."

Turkey has built a climate change weather center, providing data to the region, as well as supported afforestation projects, which helped raise its forest extension from 20.2 to 21.7 million between 1973 and 2012.