We will not abandon Turkish Cypriot rights on gas reserves: President Erdoğan 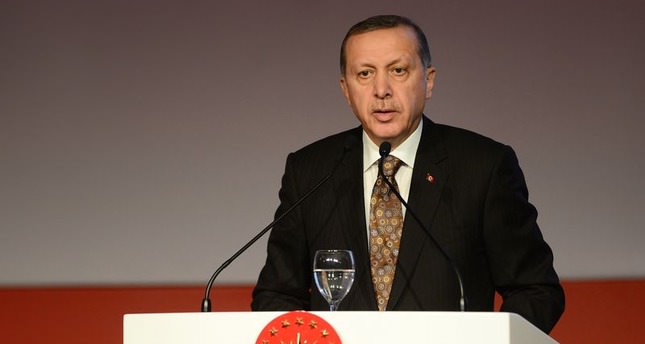 by AA Dec 10, 2014 12:00 am
Turkish President Recep Tayyip Erdoğan pledged on Wednesday to protect Turkish Cypriots' rights on Island's natural gas reserves until a fair distribution of resources is agreed with the Greek Cypriot administration.

He added that he will not to stop Turkey's drilling activities near the island.

"Turkey will never stay out of recent developments in Cyprus," he said at an address during the 60th year reception of the Turkish Petroleum Corporation.

"Our research vessel is now continuing its drilling activities. We will continue to be there as long as the Greek Cypriot administration and Greece continue to ignore our warnings on the issue," he added.

Peace negotiations between the Turkish Republic of Northern Cyprus and the Greek Cypriot administration resumed after a two-year pause in February 2013.

However, they were suspended by the Greek Cypriot side on October 7 when Turkey sent the Barbaros Hayreddin Pasa research vessel, and military ships to accompany the Greek Cypriot mission, to show Turkey's stance on the one-sided research.

Emphasizing the role of Turkey's diplomatic efforts in the recent reconciliation between the Iraqi central government and northern Iraqi Kurdish autonomous administration on oil revenues, Erdogan said: "We have just the same understanding for the Cyprus Island. I hope the success of our energy diplomacy in Iraq will be repeated in Cyprus."

The Iraqi council of ministers approved an agreement between the central government and the Kurdish Regional Government with regards to the division of revenues for oil exports.

The agreement includes the potential export of 300,000 barrels per day from Kirkuk oil fields through the Kirkuk-Ceyhan pipeline.

Erdogan also said Russia might drop the South Stream gas pipeline project in favor of a plan to build a pipeline through Turkey to supply gas to Europe.

Referring to discussions with his Russian counterpart on December 1, Erdogan said: "We arrived to a preliminary, non-legally binding agreement, and according to that the South Stream project will be shelved. Putin himself said we can change its name to Turkish Stream."

The Russian-Turkish project envisages building a pipeline across the bottom of the Black Sea and a distribution hub on the border between Greece and Turkey to bring gas to Europe. Its capacity will be 63 billion cubic meters.