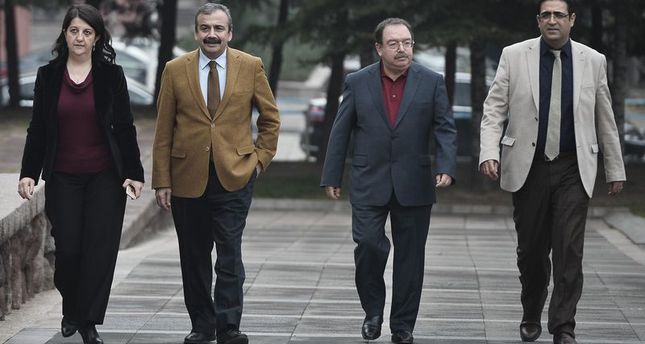 by Daily Sabah Dec 11, 2014 12:00 am
The Peoples' Democratic Party (HDP) İmralı Committee has said that KCK officials have reached a consensus on the Democratic Reconciliation and Negotiation Draft Proposal, that excludes previously sought autonomy, but aims to give more powers to local administrations in the country.

The committee said that KCK officials are ready to fulfill all responsibilities and obligations necessary to reach a final resolution. They made the comments after paying a visit to the Qandil Mountains in Iraq to meet with officials of the Kurdish Communities Union (KCK) on Dec. 8. HDP Istanbul Deputy Sırrı Süreyya Önder underlined that the proposal aims to improve the democratic standards of local governance rather than seeking autonomy.

Speaking at a press conference held on Wednesday, the committee said they had met with government officials and representatives two times and concluded that the period of consultation is ongoing and that final answers would be given once the consultations are finalized.

The committee stated that the six-hour long meeting with the KCK on Dec. 9 has ensured that the organization accepts the draft proposal and that both parties consider the proposal an important step not only to resolve the Kurdish issue, but also to move the future of democracy in the Middle East forward.

"The KCK requests that the Turkish government accept the proposal and clarify some questions regarding the matter," read the statement, underlining that the KCK is ready to take concrete action as suggested by imprisoned PKK leader Abdullah Öcalan.

In response to allegations that the proposal encourages autonomy for the Kurdish people, Önder said that his statements were taken out of context. In a televised interview on Wednesday he clarified his position: "What I meant by autonomy was to improve the local governance and give people the right to make decisions on the local level," explaining that the limits and scope of such a system was outlined by the law.

He claimed that the improvement of local governance would not result in division but would instead bring unity, that the issue was on their agenda and that the HDP proposed it at the new constitutional commission.

Earlier on Wednesday, Önder shared some points from Öcalan's statements with the press and said, "Abdullah Öcalan proposes constitutional as well as legal amendments for all, as well as the issue of autonomy."

"A separation or division is not in question," Önder said, highlighting that the draft proposal does not focus on or make reference to the Kurdish people alone and can be considered a democratic manifesto as it addresses all types of issues including the shortcomings of the democratic system, education system and economic problems.

Önder argued that the process was not about autonomy but rather democratization, and that a deadlock in reconciliation talks was out of the question, evident by their most recent meeting with Deputy Prime Minister Yalçın Akdoğan. He said that the proposal is not a secret document and would be announced when all sides deem it suitable to do so.

"A shared land and equal lives together are an absolute must for us," Önder said, and added that they hope all people, regardless of their faith and cultural or ethnic background, can share the same land under a democratic foundation.

Meanwhile, HDP Co-Chair Selahattin Demirtaş responded to Prime Minister Ahmet Davutoğlu, who said that Demirtaş would be the only person responsible for violence in any potential Kurdish protest.

Demirtaş defended himself saying that he was not calling for violence when he said his party would take to the streets if the new domestic security law is passed.

Most recently, the committee met with Akdoğan, who said that the meeting did not address issues such as autonomy, amnesty or Öcalan's proposal regarding the matter.

"The government aims to resolve the matter with the acceptance, confidence and support of the society with a common understanding," Akdoğan posted on his Twitter account.