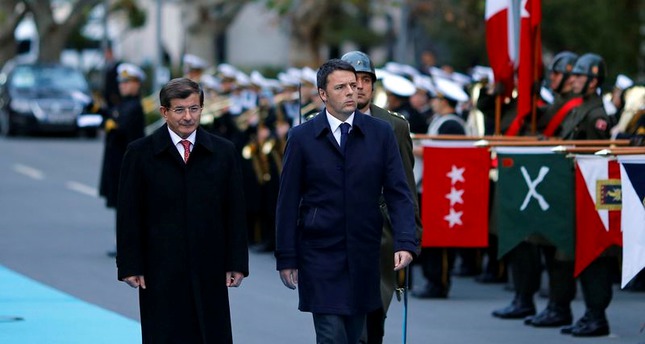 Renzi was expected to give a joint press conference with Davutoğlu after Daily Sabah went to print. He convened with President Recep Tayyip Erdoğan at a working dinner on Thursday. Renzi is expected to attend a business forum in Istanbul today.

On his visit to the Anıtkabir in Ankara, the mausoleum of Mustafa Kemal Atatürk, the founder of the modern Turkish Republic, Renzi said: "Modern Turkey and Italy have strong political, economic and cultural ties today based on sincerity. I will also support Turkey's efforts on their way to the EU."

President Recep Tayyip Erdoğan also met with Renzi at a working dinner on Thursday. Renzi is expected to attend a business forum in Istanbul today.

Italy, which is known as one of Turkey's biggest supporters in its bid to join the EU, took over the EU presidency from Greece in July and Italian officials have continuously said that Italy would like to speed up Turkey's EU accession process during its six months in the EU presidency. In January, Italian President Giorgio Napolitano stressed in his three-day official visit to Turkey that Turkey belongs in Europe and vowed to revive EU talks: "Even though certain EU member countries have adversely affected Turkey's EU process by blocking or freezing the talks on EU chapters, Turkey has Italy's full support on the accession process to the EU."

Davutoğlu has said that Turkey aims to be proactive in its foreign policies and these intense visits appear to refute allegations that Ankara is becoming isolated due to its foreign policies particularly following the chaotic atmosphere dominating the region with the Syrian civil war and the military coup in Egypt in which Abdel-Fattah el-Sissi ousted the country's first democratically-elected president, Mohammed Morsi.

During the visit, Davutoğlu announced that he invited Abadi to visit Turkey in December for a high-level cooperation meeting. U.S. Vice President Joe Biden visited Turkey in late November. The main agenda of the talks was the anti-Islamic State of Iraq and al-Sham (ISIS) coalition to halt ISIS, Washington's request to use Turkey's İncirlik air base for coalition airstrikes against ISIS and Turkey's demands in return of establishing a no-fly zone and safe zone along the border with Syria.

Diplomatic visits continued with Pope Francis coming to Turkey on November 28. Turkish leaders and the pope touched on Islamophobia, the regional chaos that has killed many people and an important issue for Christians, namely Istanbul-based Ecumenical Patriarch Bartholomew of Constantinople Bartholomew, who is the spiritual leader of the Orthodox Church and Pope Francis signed a declaration to promote peace and understanding between Catholics and the Orthodox as well throughout the world.

On December 1, Russian President Vladimir Putin arrived in Turkey with 10 ministers in tow to promise a vast increase in trade and closer relations despite sharp differences over the crises in Syria and Ukraine. During the visit, Putin announced the cancellation of the multi-billion dollar South Stream gas pipeline to Europe, saying instead that Russia would work with Turkey on a new gas hub. Davutoğlu paid an official visit to Greece on December 5 and both countries' leaders emphasized the importance of developing relations despite the remaining differences.

The Cyprus issue and ways to develop economic ties were among the topics discussed during the visit. At the beginning of this week, Davutoğlu visited Poland and announced that Turkey would lift the visa requirement for Polish citizens while Poland stressed that it supported Turkey's EU bid.

Lithuanian President Dalia Grybauskaitė arrived in Turkey on the same day and also stressed Lithuania's support for Turkey in its EU accession process.

High Representative of the EU for Foreign Affairs and Security Policy Federica Mogherini, Enlargement Commissioner Johannes Hahn and Humanitarian Aid Commissioner Christos Stylianides traveled to Turkey on December 8-9 in one of the highest profile EU visits in years to hold talks over the ways to cooperate more closely in the fight against ISIS and Turkey's EU accession process.

British Prime Minister David Cameron paid an official visit to Turkey on December 9 and the main agenda of the talks was foreign ISIS fighters traveling from Britain and using Turkey as a transit point to join ISIS militants. Both countries decided to improve and share intelligence and cooperate to stem the flow of and identify foreign ISIS fighters.
Last Update: Dec 12, 2014 9:55 am
RELATED TOPICS