PM to main opposition leader: ‘You have a pro-coup mindset’ 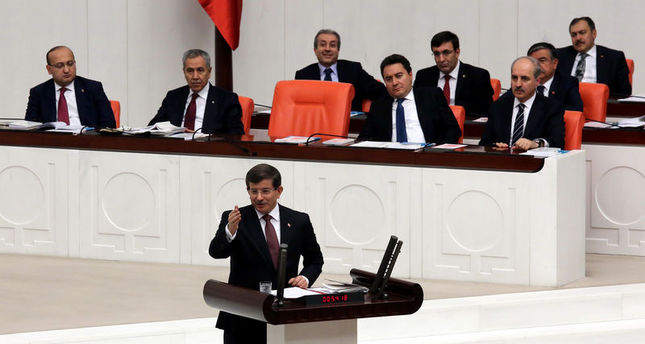 by Daily Sabah Dec 11, 2014 12:00 am
Parliament on Wednesday saw heated debate between Prime Minister Ahmet Davutoğlu and main opposition Republican People's Party (CHP) Chairman Kemal Kılıçdaroğlu. Accusing the Justice and Development Party (AK Party) of not being able to follow Syrian refugees on the Turkish border and leaving them in harsh living conditions, Kılıçdaroğlu asserted that Turkey is getting lonelier due to its foreign politics. Responding to Kılıçdaroğlu, Davutoğlu said Turkey has witnessed some of the busiest diplomatic traffic in recent times with numerous high-level diplomatic visits to Ankara from neighboring countries.

Davutoğlu added that the only issue the AK Party will stand against is oppression dominating neighboring countries. Emphasizing that the CHP sent a delegation to hold talks with President Bashar Assad of Syria and held talks with President Abdel-Fattah el-Sissi in Egypt, Davutoğlu accused the main opposition of having a pro-coup mindset. Davutoğlu's remarks caused a heated debate between AK Party and CHP groups in Parliament.

In his speech, Davutoğlu showed a document saying that when Kılıçdaroğlu was the head of the Social Security Institution (SSK), he had his son – who was 14 years old at the time and underage for legal employment– registered as an insured employee in a company so that he could take advantage of early retirement.