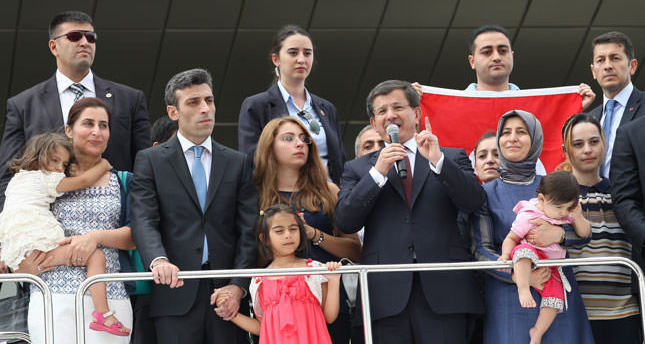 In his official complaint against ISIS leader Baghdadi, Turkey’s Mosul consul general said that prior to their captivity, he ordered security personnel to take up arms if ISIS militants tried entering the building

Turkish Consul General of Mosul Özturk Yılmaz, who was held captive by Islamic State of Iraq and al-Sham (ISIS) militants for 101 days along with 48 other hostages, has given a statement to the counterterrorism unit of the Ankara Police Department as a plaintiff.

Filing a complaint against ISIS and the Iraqi central government for his captivity, Yılmaz gave details about the process and treatment the hostages were subjected to.

The statements from the 49 hostages, including that of Yılmaz, were taken as part of an investigation launched by the Ankara Public Prosecutor's Office. The hostages filed complaints against ISIS for holding them captive and against the Iraqi central government for failing to maintain security in the region.

The 49 hostages – diplomats, consular officials and their families – were kidnapped from the Turkish Consulate in Mosul on June 11, a day after ISIS took control of Iraq's second-largest city. After roughly three months of captivity, the hostages were released in an operation carried out by Turkey's National Intelligence Organization (MİT).

Yılmaz, in his three-page statement to police, reported the incident in detail.

"ISIS militants blew up the cameras and forced the door of the building open early on June 11. I ordered the Special Forces to shoot if anyone broke in. Meanwhile I made calls to Ankara to inform the government about the incident and ask what steps to take. ISIS gave us an hour to give in and upon an order by the foreign ministry we submitted our arms," Yılmaz said in his statement.

He further said that he managed to hold "long phone conversations" with then Prime Minister Recep Tayyip Erdoğan, then Foreign Minister Ahmet
Davutoğlu and Foreign Ministry Undersecretary Feridun Sinirlioğlu with a hidden cellphone.

He also added that ISIS militants tried to force him to make a statement two or three times by holding a gun to his head. Despite the situation he faced, he resisted them and managed the process well.

"They wanted to shoot a video of me speaking against Turkey, an order that I resisted. I said I would never betray my country and that I would rather be killed than do that," he said.

Yılmaz also added that ISIS changed the location of hostages several times during their 101 days in captivity.

The group was held in eight different locations with their movements constantly followed by drones from the first day. Up to six previous attempts had been made to secure the freedom of the hostages, but failed because of the fighting in Northern Iraq.

Officers from the foreign operations department of the MİT developed a strategy to rescue the 49 hostages after analyzing other ISIS kidnapping cases in Syria and Iraq, the source said.

In a previous kidnapping case at the beginning of July, local forces on the ground in Mosul, unmanned reconnaissance drones and electronic communications were used when a group of Turkish truck drivers were held by ISIS in Mosul. The MİT strategy proved successful and the group was rescued after 23 days in captivity.