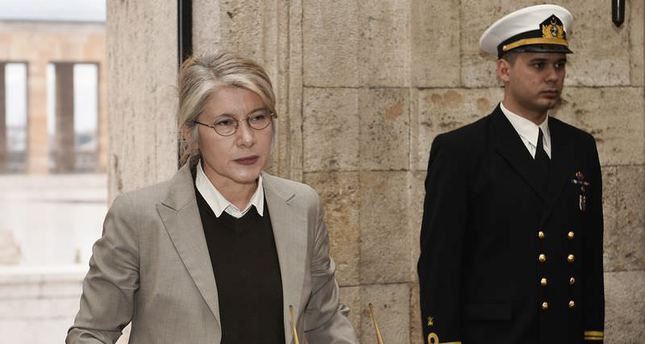 Tarhan, in hard-hitting words, said that the move to dismiss the deputy highlighted the weak understanding of democracy underpinning the party.
Upon the CHP's controversial decision to dismiss Batum for his remarks supportive of Tarhan's resignation, Tarhan directed sharp comments at party Chairman Kemal Kılıçdaroğlu. Castigating the party administration for taking another anti-democratic step, she said she also found it odd to see the party occupied by a trivial pursuit while the Turkish agenda is so busy.

This is not the first time Tarhan has been highly critical of the party's policies and moves. She released a bitter press statement regarding her resignation in which she blamed the CHP's administration for their "wrong and weak policies," which she said are not representative of the people's sentiments and were not made with winning elections in mind.

Tarhan, in reference to Kılıçdaroğlu's allegation that a certain group within the National Intelligence Organization (MİT) had been ordered to create trouble in the party and weaken the party's image, sarcastically asked if the MİT too was behind Batum's dismissal.

Alluding to Kılıçdaroğlu, she also said an attempt was made to "behead" a member who had voiced opposition to an order, a reference to the old Sultan practice of ordering executions. She said Kılıçdaroğlu had no right to accuse some circles and structures of dictatorship, implying that he himself acts that way.

Meanwhile, Batum announced a day after his expulsion from the party that he will resort to legal means to prove the "injustice" he was subjected to.

"I will definitely go to court as the decision is blatantly against the law," Batum said on Friday.

He added he was not informed of the reasons of his dismissal and that he will file a lawsuit demanding cancellation of the decision.

"I will also file a lawsuit against all members of the CHP Central Executive Board [MYK], including Kılıçdaroğlu, demanding compensation," he was quoted as saying.

Noting that he was having difficulty comprehending the grounds of the decision of the disciplinary committee, Batum spoke against the decision: "What have I done? Have I committed theft? Have I insulted anyone? Could criticizing be reason enough for dismissal? No. I must be able to understand what I have done."

Batum had previously said that Tarhan's resignation would not be the first and there are many dissidents who are suffering from the CHP's policies and are considering resignation.

These remarks allegedly led Batum to be referred to the disciplinary committee and later, his dismissal from the party.