Turkey, Italy to collaborate on solution for Libya 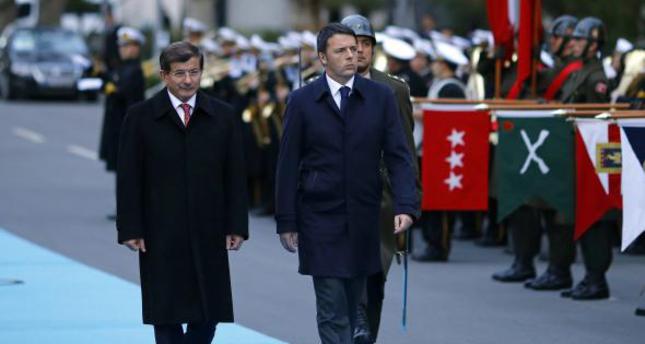 by AA Dec 13, 2014 12:00 am
Prime Minister Ahmet Davutoğlu and his Italian counterpart Matteo Renzi agreed to work together to find a solution for the conflict in Libya.

"We will jointly work towards a comprehensive reconciliation process in Libya that will bring together all the parties in the country," Davutoğlu said, speaking at a joint press conference in Ankara with the Italian prime minister. He described bringing peace and stability to Libya as important not only for Turkey but also for Italy and for all of Europe. "Italy and Turkey will create working groups on illegal immigration and refugees from Libya." Davutoğlu noted that Italy is Turkey's fourth-largest trading partner, with a trade volume of about $20 billion in 2013. "To improve relations, we agreed to promote mutual investments, and jointly to develop projects in third countries," he said. Further, Davutoğlu proposed establishing a Turkish-Italian University. "As two friends and allies, we both believe wholeheartedly that our cooperation will in the next few years contribute to both nations as well as peace in the Mediterranean sea, Europe, and the international arena."

Renzi said "I believe that the international community needs to support Turkey more," referring to Turkey's providing shelter for 1.6 million Syrian refugees. Renzi has also expressed his support for Turkey's bid for EU membership. "We will continue to work so that the EU opens its doors more decisively to Turkey." He said that he would press for the opening of new chapters - key agreements - in the negotiation process. So far, 14 chapters have been opened for discussion, while 17 remain blocked and another four have yet to be discussed. Only one chapter has been opened in the past three years. Italy is the incumbent president of the Council of the European Union since it took over the rotating six-month term-presidency from Greece in June. Renzi said 1,200 Italian companies are now actively operating in Turkey. The business forum to be held on Friday in Istanbul is important for creating new employment opportunities, he said.

Renzi said that Italy should invest more in Turkey. "We agreed to work together on a number of strategic projects, mainly in the defense industry sector," he added.