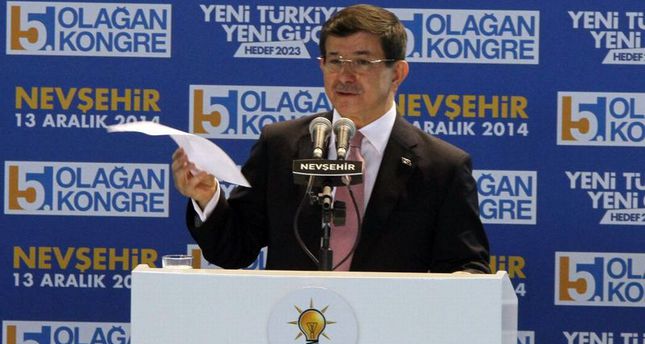 by Daily Sabah Dec 15, 2014 12:00 am
Following provincial meetings in four different Turkish cities over the weekend, Prime Minister Ahmet Davutoğlu echoed his previous claims regarding the relation between the Gülen Movement, which allegedly infiltrated key state bodies to overthrow the elected government, and the PKK, which took up arm against the Turkish state in order to carve out an independent Kurdistan in southeastern Turkey.

Initially, Davutoğlu touched on the alleged contact between the movement and the PKK on his way back to Turkey from Poland last week. Reiterating these statements, he asserted that the government has documents showing contact.

"We have open and clear documents [regarding the relation]. This is not gossip. This is contact," said Davutoğlu.

Last week, Davutoğlu said that the government is well aware of the talks and contacts between the Gülen Movement and the PKK, and added that the public also has a right to know about these relations.

The Gülen Movement is considered a national threat by the government because it is accused of wiretapping thousands of people, including Turkish government officials, encrypting phones and infiltrating state institutions with the aim of toppling the government. The movement is led by Fethullah Gülen who lives in self-imposed exile in the U.S. The movement is believed to be against the reconciliation process that began between Kurdish citizens and the Turkish state to successfully end the decades-long PKK conflict in the region and to boost investments in eastern Turkey.

The reconciliation process started in 2012 with Justice and Development Party (AK Party) initiatives, and many democratic steps were taken to uphold Kurdish citizens' rights through the process and democratization packages.

Davutoğlu said that the PKK pursues an elimination strategy in eastern Turkey by pushing people to migrate, and put forward these strategies as a reason for the government's calls for public order.

The reconciliation process stalled with the October 6-7 Kobani demonstrations when the Peoples' Democratic Party (HDP) Co-Chair Selahattin Demirtaş called for a street protest to show support for Syrian Kurdish fighters in Kobani, Syria, battling the Islamic State of Iraq and al-Sham (ISIS) while accusing the government of not giving enough aid to Syrian Kurdish fighters in their struggle. Dozens of people lost their lives in the protests that morphed into violent clashes between pro- and anti-PKK groups. Later, aiming to prevent similar incidents, the government proposed a package bill to balance "security" and "freedom."

When asked whether the package poses a threat considering Gülen Movement infiltration of the police force, Davutoğlu said that if demonstrators do not want to be used as pawns by the movement, they should not use Molotov cocktails in their protests.

Touching on the cultural effects of the reconciliation process in the region, the prime minister said that the process is expected to start re-immigration and help to develop the middle class.