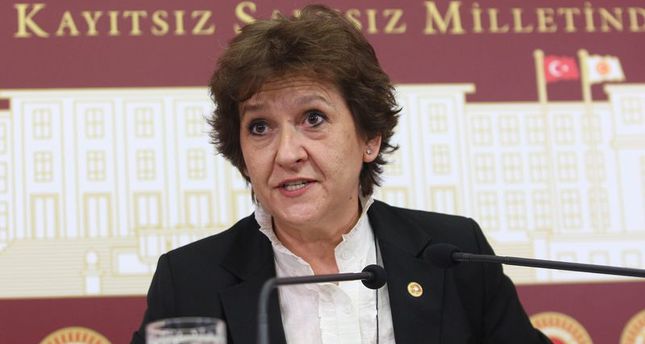 by Daily Sabah Dec 16, 2014 12:00 am
The Tahşiye case probe against Gülen-linked figures as part of the December 14 operation has sparked controversy within the main opposition Republican People's Party (CHP). Although CHP leader Kemal Kılıçdaroğlu opposed the Tahşiye operation by saying that what the Justice and Development Party (AK Party) does is against democracy, CHP İzmir Deputy Birgül Ayman Güler, who previously stressed the cooperation between the Gülen Movement and CHP in the March 30 local elections, did not step back, but continued her criticism against the party administration.

Güler said, "For the last 10 years, this circle [Gülen Movement] that is responsible for the violation of law, press principles and technical operations should pay the price before the court for wiretapping, leaking illegal wiretapped conversations, fake evidence, establishing fake expertise and abolishing the right of defense."

She further urged her party, the CHP, to avoid becoming a shield for the movement.

Noting that the way to leadership lies in principled politics, not tactics, the CHP İzmir deputy said the CHP should ensure that those who violated laws should be held accountable in front of justice.

On Monday, Güler accused the party of forming an alliance with the Gülen Movement during the March 30 local elections, when they cooperated with different elements of the movement in the provinces and districts.

"Despite the denial of the party administration, the CHP cooperated with the Gülen Movement during the March 30 local elections" said Güler.
While the İzmir deputy alleged relations between the Gülen Movement and the CHP, the party's Deputy Chair Akif Hamzaçebi, in a press conference at the Turkish Parliament on Tuesday, denied those claims, saying "I strongly deny those allegations. This is completely unsubstantial."

The Gülen Movement, led by Fethullah Gülen, who in the U.S. resides in self-imposed exile, is seen as a national threat to the state by the government, who accuses it of wiretapping thousands of individuals, including senior government officials and allegedly infiltrating state institutions to overthrow the government.

Kılıçdaroğlu, on the same day, announced that Güler's allegations regarding the ties between the CHP and the movement is under the microscope, and signaled that she may be referred to the discipline committee for her remarks.

The party has been facing disintegration recently, as dissenting voices among party members have been getting louder. The party administration was first criticized by Muharrem İnce following the presidential election that resulted in disappointment for the party. The local elections that took place five months before the presidential election were likewise a failure for the CHP. Two subsequent stories of failure led party members to question the leader's capability of establishing the kinds of policy to achieve success.

Emine Ülker Tarhan, before submitting her resignation from the party, blamed the CHP's administration for their "wrong and weak policies," which she claims are not representative of the people's sentiments, and were not made with winning the elections in mind.

Following Tarhan's resignation, Eskişehir Deputy Süheyl Batum asserted that there are 20 more deputies within the CHP who stand against the current policies of the party, and he was dismissed from the party after a disciplinary committee decision.