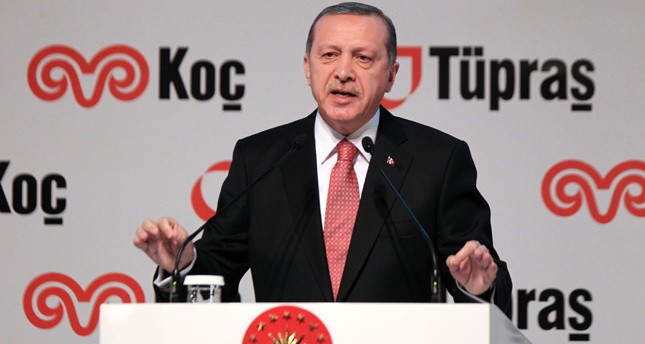 by Daily Sabah Dec 16, 2014 12:00 am
President Recep Tayyip Erdoğan, speaking at the inauguration ceremony of a fuel oil facility yesterday, touched on the detentions on Sunday and said that no compromise should be expected with those who aim to chart out Turkey's future with perception operations or misleading news. Noting that despite various operations, Turkey will continue to grow stronger, the president described the latest operation and the ongoing situation as a "normalizing process," and said that what Turkey has recently seen is the beginning of the "New Turkey."

"Those who become involved in dirty operations with the aim of seeing Turkey return to old times are getting their response and they will continue to do so," added the president in his first speech after the Tahşiye case operation.

Once again, the president highlighted that the operation has nothing to do with media freedom or freedom of speech, and that the operation did not target any specific media outlets. It is rather part of the Tahşiye case that is believed to be illegally carried out by Gülen-linked officials. But he reiterated that national security comes first, and said that "whether they are members of the media or not, those who threaten our national security will get the necessary response."

The president stressed that the operation was initiated by independent prosecutors and said, "There are ruthless foreign and domestic reactions against the operation that was initiated by independent prosecutors and carried out within the law. We won't allow judges and prosecutors to be pressurized. The normalizing law system will not allow innocent people to be portrayed as criminals while the criminals walk around freely." On the EU's statement regarding the Istanbul-based operation as part of the Tahşiye case, the president said that the EU should be sincere over the latest incidents, and referred to the murder of Özdemir Sabancı, a second-generation member of the owner of the country's second-largest industrial and financial conglomerate, and the chief suspect of the murder Fehriye Erdal, who is not still extradited by a Belgian court. According to a ruling from both the Belgian government and the country's courts, Erdal is neither extradited nor put on trial in Belgium.

"If the EU is sincere enough, why would it protect Fehriye Erdal, the suspect of the Sabancı murder?" asked Erdoğan.