Red Notice may be issued against Fethullah Gülen 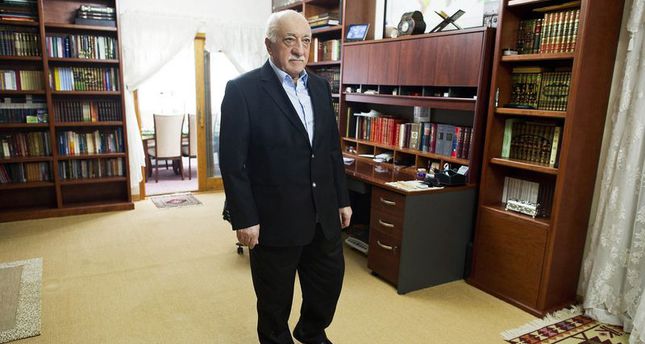 by Daily Sabah Dec 16, 2014 12:00 am
Reportedly, a Red Notice to be issued for the head of the Gülen Movement, Fethullah Gülen, is on the agenda as part of the December 14 Tahşiye case operation, after a number of Gülen Movement-linked figures were taken into custody.

Turkish Prime Minister Ahmet Davutoğlu confirmed media sources and also said a Red Notice may be issued for the head of the Gülen Movement, Fethullah Gülen in case of a demand by judicial authorities.
"The judiciary will do whatever is necessary in the investigation of Fetullah Gülen. Whether it is a Red Notice or something else. He will not be treated differently than any other Turkish citizen," Davutoğlu said in press conference with the visiting Chad Prime Minister Kalzeubet Pahimi Deubet in Ankara.

There are a few steps needed to be taken for the warrant. Since Gülen is abroad, the warrant is first submitted to the Justice Ministry's General Directorate of Penal Affairs, then the Ministry will apply to Interpol with a demand to issue a red notice and lastly, if the Interpol secretary general accepts the demand, the red notice will be issued for the head of the movement.

The Gülen Movement is considered a national threat by the government because it is accused of wiretapping thousands of people, including Turkish government officials, encrypting phones and infiltrating state institutions with the aim of toppling the government. The movement led by Fethullah Gülen who lives in self-imposed exile in the U.S., is believed to be against the reconciliation process that began between Kurdish citizens and the Turkish state to successfully end the decades-long PKK conflict in the region and to boost investments in eastern Turkey.

The Red Notice is necessary to search for, find and extradite a criminal at the international level and is considered and issued by the Interpol secretary general with the demand of member countries. If it is issued, Gülen's identification information, the crime he committed, photos, fingerprints and penalty will be distributed to the 190 member countries. The validity of the notice is five years. Since Gülen's address in the U.S. is known, the Turkish state will demand his extradition from the U.S.