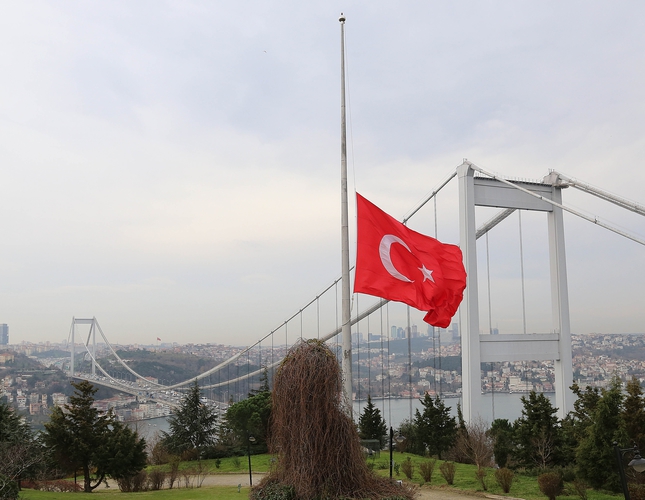 by Daily Sabah with AA Dec 16, 2014 12:00 am
Turkish Prime Minister Ahmet Davutoğlu announced one day of national mourning on Wednesday for more than 100 victims, mostly children, who were killed in a terrorist attack on a Pakistani school on Tuesday.

"I offer my condolences to Pakistan and harshly condemn the attack," Davutoğlu said in press conference with the visiting Chad Prime Minister Kalzeubet Pahimi Deubet in Ankara.

President Erdoğan called Pakistani counter-part Mamnoon Hussein and Prime Minister Nawaz Sharif on Tuesday over the deadly attack offering condolences to the country and the victims' families.
During the phone call, Erdoğan strongly condemned the attack that targeted defenseless children while they were learning and said he sincerely believes the people of Pakistan will never allow terrorists to reach their goals in the country.

The Turkish Foreign Ministry also condemned the attack and offered its condolences to the victims' families.

A group of gunmen attacked a school on Tuesday, killing 141 people - 132 students and nine staff members - in one of the deadliest attacks the country has seen in its 66-year history, according to a Pakistani army spokesman. All seven attackers have also been killed.

The attack has been claimed by the Tehreek-e-Taliban Pakistan militant coalition, who called it a "response" to the Pakistan army's anti-militant operations in the North Waziristan tribal area, which began six months ago on June 15.