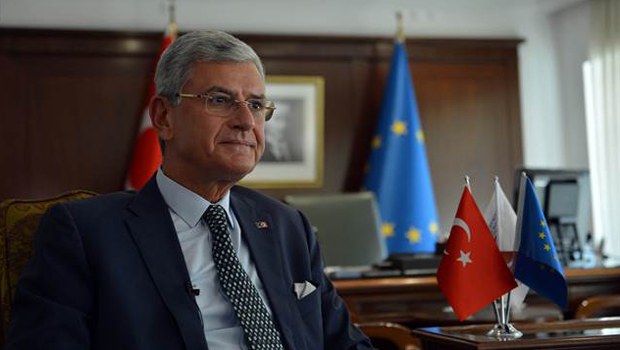 by Daily Sabah Dec 17, 2014 12:00 am
The EU's announcement about the Tahşiye operation against Gülen-linked figures, which started on December 14, which claimed, "This operation goes against the European values and standards Turkey aspires to be part of," has drawn ire in Turkey with many seeing it as a "double standard" considering the EU's previous stance on scandalous methods of journalism.

"Minister Bozkır mentioned to his counterpart that the judicial process was still ongoing, and that the executive was not involved in this process in accordance with the principle of the separation of powers," a statement from the Turkish EU Ministry said. The EU's criticism of the probe has brought to mind the closure for wiretapping activities in 2011 of the British tabloid News of the World, which was in circulation for 168 years. News of the scandalous methods of journalism broke in 2011 when it was revealed that the tabloid tapped the phones of hundreds of U.K. citizens, including celebrities and victims of crimes and terrorist attacks.

Following the scandal, former News of the World news editor Greg Miskiw and chief reporter Neville Thurlbeck were each sentenced to six-month jail terms. Journalist James Weatherup and private detective Glenn Mulcaire received suspended sentences of four and six months respectively, and were both ordered to perform 200 hours of community service. Andy Coulson, the former editor of Rupert Murdoch's News of the World, was jailed for 18 months and released five months later.

Another scandalous episode in British journalism was revealed when former National Security Agency (NSA) official Edward Snowden published documents regarding surveillance activities carried out by the NSA. Two officials from British intelligence service asked the British daily, the Guardian, not to publish the reports, something publicly announced by the Guardian's editor-in-chief. The British Prime Minister David Cameron also said at the time that Snowden's leaks were"not going to make our world safer. It's going to make our world more dangerous. This is helping our enemies."