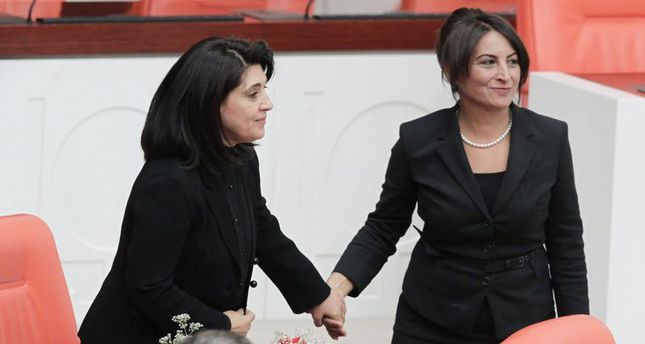 by Daily Sabah Dec 17, 2014 12:00 am
Pro-Kurdish deputies Leyla Zana and Aysel Tuğluk, who received a five-year political ban by the Constitutional Court in 2009 following the closure of Democratic Society Party (DTP), will now be able to join political parties and participate in political activities. Both deputies have stated that they will be joining the pro-Kurdish Peoples' Democratic Party (HDP).

"Political bans are a serious violation of rights" said Tuğluk according to reports and said that she hopes political bans and closure of political parties will not occur in the future. She stated that they are in favor of resolving the Kurdish issue through democratic and political means rather than violence and noted that Kurdish people have elected them as representatives. Tuğluk argued that the right to participate in political activities should be guaranteed by the state.

It was reported that Tuğluk and Zana will both apply to become members of HDP while both have stated that they are in favor of a peaceful resolution to the decades long Kurdish issue.

Leyla Zana and Aysel Tuğluk, along with 30 other politicians, were banned from politics for five years in 2009 for being members of DTP, which allegedly had links with the PKK. While the decision banned their affiliation with political parties, Zana and Tuğluk were re-elected to the Parliament in 2011 as independents.

Their transfer to HDP will increase the party's seats in the Parliament to 29.