Turkey to move forward with the strong bonds to its ancestors: President Erdoğan 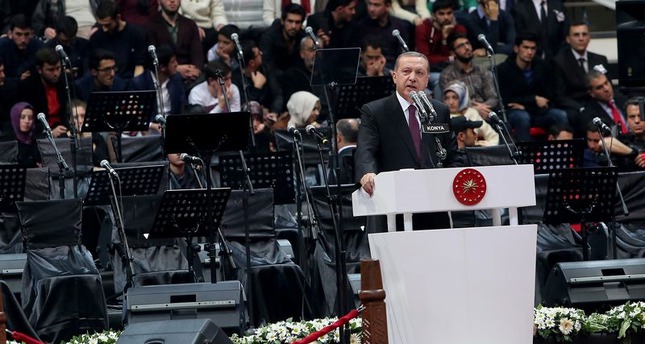 by AA Dec 17, 2014 12:00 am
Rumi's philosophy of tolerance and fraternity is what brought the people of Turkey together on its days of independence, President Recep Tayyip Erdoğan said Wednesday.

"If we have a homeland and a flag today, and if we live in an independent country, all fraternally, this is thanks to believers like Mevlana, Ahmed Yesevi, as well as our generals such as Saladin (of Ayyub dynasty) and Alparslan (of Seljuk dynasty)," Erdoğan said.

He made the remarks during his speech in central Konya province to commemorate the 741st anniversary of Rumi's death.

He praised Rumi's Masnavi, which is a collection of his works. "A work can live for more than seven centuries only if it is written with love," Erdoğan said.

The president said the bonds between the Turkish people and its ancestors continue to be strong.

"Those who think our bonds with our roots, history, culture and civilization are on the knife edge are in for a very big mistake. This nation, exposed to many attacks from outside and many treasons from inside, will always thwart all such plans thanks to the strong bonds with its history and ancestors," he said.

Rumi's masnavi is an extensive series of poems about the love of God and is considered one of Anatolian culture's most important works.