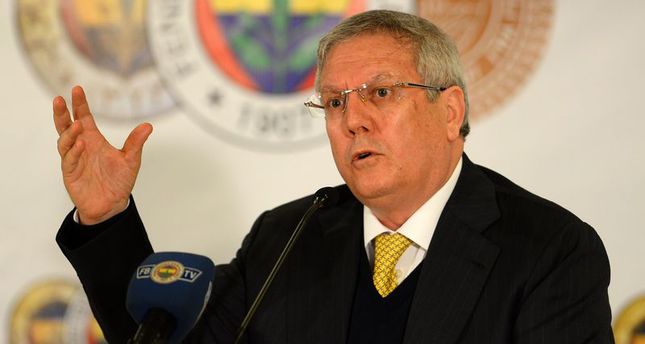 by Daily Sabah Dec 17, 2014 12:00 am
Fenerbahçe Chairman Aziz Yıldırım has filed a 179-page complaint against all the officials who took part in the match-fixing case that sent Yıldırım to jail for a year.

In his complaint letter, Yıldırım claimed that members of the Gülen Movement planned a plot that targeted his relations with then prime minister and current president, Recep Tayyip Erdoğan, Turkish media reported on Wednesday.

Prosecutor Mehmet Berk, who looked into the match fixing case, had reportedly told Yıldırım during his interrogation that the match-fixing case that rocked Turkish football was a "minor operation."

"We'll conduct larger operations in which you will witness the arrests of high profile people," the prosecutor reportedly told Yıldırım, a statement that is interpreted by many as a sign of Dec. 17 and Dec. 25 operations, in which Gülenist infiltrators in the judiciary and police department had allegedly tried toppling the ruling government.

Yıldırım claims the match fixing case was planned long before the investigation was initiated. "Police wrote an appropiate report on the planned plot, which was later turned into an indictment and followed by a court ruling against us," Yıldırım reportedly said in his complaint, adding that he was illegally wiretapped by the movement.