Freedom of expression contributes to welfare in Turkey, say experts 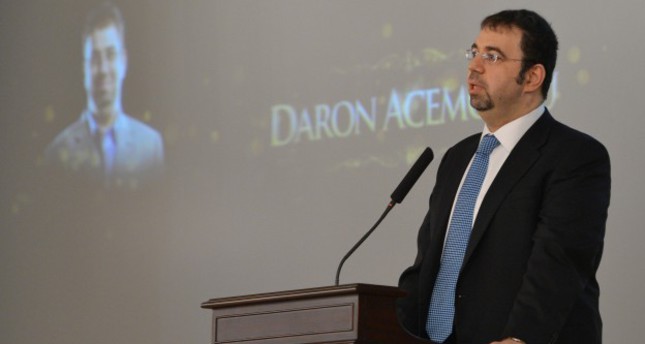 Freedom of expression is not only a human right, but contributes to improving economic success and citizens' welfare.

This was the message from an economics and a law expert speaking at a Transparency International event in Istanbul earlier this week.

A leading economist from the Massachusetts Institute of Technology, Daron Acemoğlu, and Gönenç Gürkaynak, a lawyer and academic from Istanbul's Bilkent University, spoke at a congress "Total Welfare Consequences of Rights and Freedoms" on Thursday.

Acemoğlu said that economies without democratic values and inclusive, solid institutions would not create stable and sustainable welfare for their people.

He added that any governance without inclusive institutions was bound to fail, as he defended in his bestseller book "Why Nations Fail: The Origins of Power, Prosperity and Poverty," which he wrote with James A. Robinson.

In their book, the duo argue that inclusive institutions which encourage the participation of many as parts of society in governance are the key elements of sustainable economic success.

"Turkey, as other developing nations, had a mixture of inclusive and extractive institutions. Turkey has never been a country with a powerful civil society, but rather has been a sultan's state with its political and economic institutions from Ottomans to this day," said Acemoğlu.

Acemoğlu's solution to this issue is increasing demand from people for human rights, transparency, freedoms plus the participation of society from bottom to top, to eventually lead to increased welfare.

Legal expert Gönenç Gürkaynak, who previously represented Twitter in Turkey, said freedom of expression, as the mother of all kinds of freedoms, would lead to more innovative ideas and would help to boost total welfare in society.

He made a call for a law order focused on individual liberties for Turkey to realize its growth potential.

"We can say that freedom of expression can support growth," said Gürkaynak. "[Freedom of expression] is one of the important ways to maximize innovative thinking by expanding and strengthening it," he added
Last Update: Dec 20, 2014 11:12 am
RELATED TOPICS