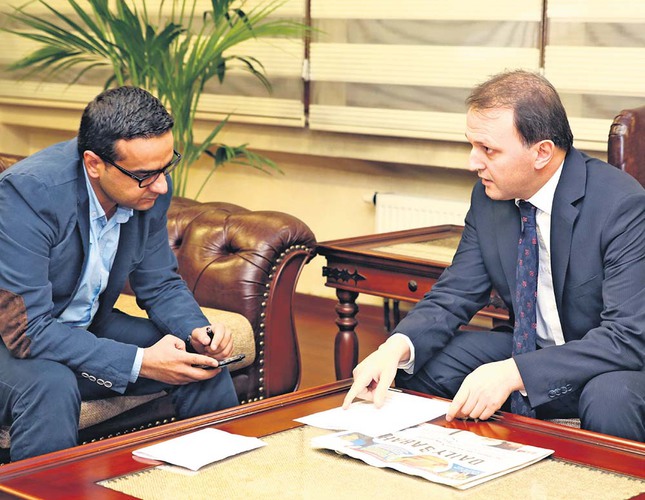 In an interview with Daily Sabah, the head of the General Directorate of Foundations, discussed the foundation and returning of confiscated real estate properties to minority foundations

Many different activities in fields such as healthcare, education and public works are carried out by foundations, and Turkey, with its Seljuk and Ottoman history, is one of the richest countries with regard to foundations. Today, the General Directorate of Foundations protects and maintains foundations in Turkey. Dr. Adnan Ertem, who dedicated his education and career to foundations, is the head of the directorate. Daily Sabah spoke with Dr. Ertem regarding recent foundation-related discussions such as whether the synagogue in Edirne will be open to worship and the Halki Seminary.

Dr. Adnan Ertem : The General Directorate of Foundations is an institution responsible for all of the foundations left from the Ottoman Empire. Starting with the Republic, foundations belonging to the dynasty passed on to the newly formed state. Today, we manage 52,000 foundations. We are like the board of trustees for these foundations. We make decisions for investment, restoration and charity, and then realize them.

In the Ottoman Empire all public works, except for the judiciary and internal and external security, were done by foundations. Public works, which are undertaken by local administrations nowadays in the modern state paradigm, were assumed by foundations.

Professor Esad Arsebük, who lived his entire life in the Ottoman Empire, had always come up with one foundation or another. However today, with the diversification of state institutions, foundations' activities are limited to providing scholarships, helping the impoverished and conducting restoration.

In these fields, we are doing whatever we can. For example, we gave scholarships to 5,000 college students last year, and we have been giving financial aid to 15,000 secondary education students since 2008. We have made a leap in restoration; before 2002, the yearly restoration count was 10, but we have made 4,000 restorations since 2002. This could also have been achieved in the past, but historical structures were neglected.

DS: In recent days, the General Directorate of Foundations started to provide food aid to impoverished, minority citizens. Could you give more information regarding this activity?

AE: There are some foundations for minorities left to us by the Ottoman Empire. We need to do what is necessary. We restore churches and synagogues because they are entrusted to us. It is also a must to provide help to people in need who go to these places of worship. Nonetheless, this kind of application, which is aimed only at minorities, is being done for the first time. We did answer individual requests before, naturally.

DS: It was forbidden for minority foundations to acquire property due to legal rulings and they were victimized for many years. Could you elaborate on this subject?

AE: To explain this situation I should inform you of the historical process behind it. With a legal regulation in 1936, minorities were requested to establish foundations via charters that included a list of the properties owned by them. This is important in two aspects. First, the charters would allow them to become a legal entity and second, the presented property would be ratified as the property of this legal entity, regardless of its ownership by a real person. The charters were given, and there were properties that belonged to real persons. There weren't any problems for minorities in this process and they acquired property through inheritance, donations and purchase. However, in 1974, with the infamous Court of Cassation ruling, minority foundations were disallowed from acquiring more property. It may seem normal at first, but the injustice was that there was a court decision for the return of property to their previous owners. After 1974, this decision was enforced. This continued until 2002. Because it was unjust and against universal law, there were regulations implemented in January 2002. Three additional regulations were implemented in 2003, 2008 and 2011 and the limitation for acquiring property was removed. There is, however, an exception for the return of property. Those that were acquired by the state were returned to their original owners. In individual cases, it is not possible due to legal impasses and injustice. Still, the current laws allow people to seek their rights in court for this matter. Foundations can pursue this and reacquire their property via this channel. The most important point is that if the state sold the confiscated property, it has been possible to request reparation since 2011. Almost all requests have been accomplished.

DS: You state that real estate properties belonging to minority foundations are being returned, but there are indications that 10,000 properties have not been returned. Could you please clarify this?

AE: There is confusion and information pollution on this subject. We have accomplished many great works and we are continuing to do so. However, in some public opinion, this has not been adequately understood. The reason is that as the institution, we are only responsible for foundation properties. Many of our citizens left the country in 1934 during the oppression of minorities in Tekirdağ and Kırklareli and in the 1963 and 1964 Gökçeada situations. Their properties, according to the law, were left to the Treasury. The Treasury may have held these properties or sold them. There is damnification on the individual level; that is true.

A person learns that his father or ancestors owned a property such as this. Then he comes to Turkey and tries to claim his inheritance. However, the real estate had either been sold or no longer belongs to the state. The number 10,000 is due to this situation. This person can pursue legal action; there is no problem with that. But these people demand a new regulation for the return of these properties, and they appeal to us. When we reply negatively because our responsibility is limited to properties owned by foundations, they complain, saying their property was not returned. The place to demand the return of individual property is the court, not the General Directorate of Foundations.

As I have said, our responsibility is limited to foundations. There are around 1,500 to 1,600 properties belonging to community foundations and 1,000 of these properties have been returned so far. Other appeals are either not in accord with the law or do not have the required conditions.

On the other hand, as I have mentioned, those supposed figures are expressed as if it is our responsibility. These figures do not reflect the truth.

DS: Some circles regard the return of minority foundations' property as treachery and a new form of capitulation. What is your reply to these allegations?

AE: When the regulations were ratified in 2011, our president said that this was not out of grace, but it was the return of rights to the rightful owner. Beside universal laws, it is also against the nature of Islam to confiscate property, whether Muslim or non-Muslim. How can this be considered as capitulation? Were these their properties? Were they confiscated? Yes. Therefore, to return the properties is a virtue and also a requirement according to Islam. It is sad to see these improvements being subjected to politicization. They say: "Greece is not giving our properties back, so why should we? There should be parity." However, regarding rights, this is not the case. You have to give a right back. Also, we think this will have a domino effect, affecting other places. As Turkey, we have done what virtue required. There are developments in Greece and Bulgaria regarding limitations toward Muslim minorities. This will be furthered.

DS: The subject of re-opening the Halki Seminary is often on the agenda. Are there any developments on this subject?

AE: The reopening of the Halki Seminary is not a return of a right – it is an initiative. It depends on the government either opening or not opening this particular seminary. It is not a right to allocate a religious school to minorities. The state provides education in its universities. However, congregations do not accept this and want to educate themselves. If the state gives this initiative to congregations, it means that it will want an equal initiative for itself. The reopening of the mosque in Athens is a right, as we also restore churches, because religious practice is a right. The Fethiye Mosque in Athens was built through a foundation, but it is used as a library or a museum now. Athens is the only European capital that does not have a mosque. We want it restored and opened for worship. It is known that our president demanded that the Fethiye Mosque be opened for worship in exchange for reopening the Halki Seminary. As I have said, however, there isn't parity. What they should do is the reinstating of a right, while ours is an initiative. From this perspective, I find that Turkey's stance is right.

DS: In the past weeks, after the raid on Al-Aqsa Mosque by Israeli forces, the governor of Edirne decided to limit the usage of the newly restored synagogue. You replied to this statement by saying, "The Edirne Synagogue will stay as a synagogue." What are the recent developments on this subject?

AE: We have made our statements on this subject. We have authority over the newly restored synagogue and it will continue to serve as a place of worship.

Some people criticized us for restoring the synagogue. However, these are foundations that were left to us from the Ottoman Empire. Our ancestors built them. This was made by Abdülhamid II in 1904 and it will continue to serve its original purpose. Even though there is no congregation, a Jew should be able to pray there. It will be exactly like the Selimiye Mosque; while some are praying, others will be visiting. Therefore, it will also function as a museum.

DS: Could you give us information regarding the number of churches and synagogues that were restored or are currently being restored?

AE: There are nine completed and three ongoing restorations. One is the Saint George Church, which we recently started to restore in Edirnekapı, İstanbul. There is the synagogue in Edirne and the Bulgarian Sveti Church in Istanbul – these restorations are continuing. In addition, we have also completed restorations in Anatolia, Diyarbakır, İskenderun and Gaziantep. We first restore the ones that are in city centers. These historical and cultural entities are one of the most important elements of tourism. We do not prioritize ones out of the city center, not yet. We think that a historical building in ruins in a city center will affect tourism negatively, so we start restoring them. While many of them will not be used due to the lack of an active congregation, we restore them because they are our cultural heritage.

DS: Prinkipo Greek Orthodox Orphanage was returned to the Orthodox Patriarchate due to a decision by the European Court of Human Rights (ECtHR). Are there more cases like this by the ECtHR?

AE: Currently, there is only one more case such like this. The continuing case is by the Deyr'ül Umur Monastery in Mardin. The problem there is that the land previously owned by the church is now forestland. This causes a problem in returning their lands. Now the case is being heard by the ECtHR.

Dr. Adnan Ertem graduated from Istanbul University's Public Administration Department and completed his Master's Degree with a thesis titled, "Applications Regarding Foundations in the Early Years of the Republic," in the Political Science Department of Istanbul University's Social Sciences Institute. He completed his Ph.D. dissertation "Foundations from the Point of Social Consolidation in the Ottoman Empire and the Republic of Turkey," at Istanbul University. He started to work as deputy inspector at the General Directorate of Foundations in 1991 and has served as the executive of the same institution since 2010.