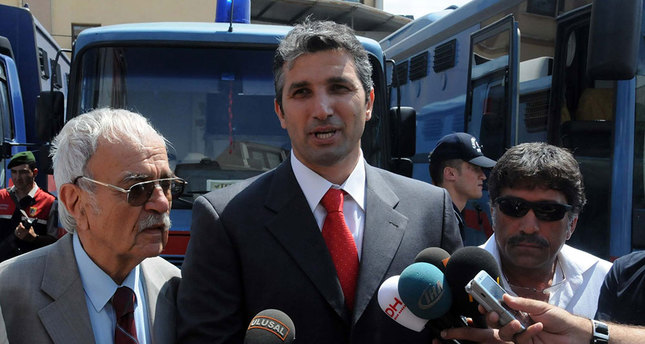 Nedim Şener, who was jailed by prosecutors linked to the Gülen Movement, says the world doesn’t understand the threat posed by the group as clearly as those living within Turkey

An investigative journalist, Nedim Şener, who has been targeted and arrested by members of the Gülen Movement in the police and judiciary in the past years after writing a book about the misconduct of police officers affiliated with the movement in Hrant Dink's murder, told Daily Sabah that the Gülen Movement has two different faces - one for Turkey and another for abroad. This has led to the change of perception while evaluating the movement and its activities worldwide.

"[The movement] introduced itself under the guise of [interfaith] dialogue, tolerance and educational activities abroad while they conduct illegal and unlawful activities within Turkey," Şener said, adding that they literally carry out activities as "a state within a state" and they do not deny it.

"We can see their illegal activities with their dominance in police forces, the judiciary and in their protectiveness over cases such as the Hrant Dink murder," he claimed. Şener was put behind bars allegedly by members of the Gülen Movement. Fethullah Gülen, who resides in the U.S. in self-imposed exile, leads the Gülen Movement, which has charter schools and organizations in hundreds of countries around the world.

The movement is currently accused of attempting to infiltrate Turkish state institutions including the police and judiciary as well as unlawfully wiretapping thousands of journalists, politicians, state meetings and encrypting phones belonging to government officials.

The story of Şener's confrontation with the Gülen Movement dates back to when Şener documented the connections of top police officers to the Gülen Movement in his books, "The Dink Murder and Intelligence Lies" (2009) and "Red Friday" (2011). The top police officers in question include Ali Fuat Yılmazer, who was then the head of the police intelligence unit and Ramazan Akyürek, the head of the Trabzon Security Directorate, who shouldered the responsibility for Dink's murder in 2007, which was committed by Ogün Samast, a resident of Trabzon.

Şener's accusations put him in the spotlight and led to what he claimed was a plot against him. For over one year he was kept in pretrial detention and freed in March 2012, but he still faces a 15-year sentence pending the outcome of his trial. When asked how the perception of the movement changed abroad, Şener emphasized that there is no need to struggle to change that perception since they "partially" carry out what they pledge abroad while in Turkey they are completely different, and what matters is to see their illegal activities in Turkey.

"People living abroad in general have a positivist and normative approach to each incident so the movement's goals such as educational activities seem to be enough in the first place. Yet, a trial on legal grounds with tangible data is a must to show those people their real motives behind illegal activities."

Şener urged that if a trial on legal grounds is not taken as part of the December 14 Tahşiye case probe launched into Gülen Movement-linked police and media figures, uncovering their real motives in Turkey would become difficult. "To see how dangerous they are, a legal ground is a must," reiterated Şener by noting that the movement is like a wolf in sheep's clothing.

Şener's remarks came only days after the December 14 Tahşiye probe was launched. Pointing out how and why he was arrested by Gülen Movement-linked police officers and how media figures stood behind the allegations against him, Şener continuously reiterated that he is not after revenge, but a trial on legal grounds for Gülen Movement figures.

Portraying the current situation of some Gülen Movement-linked figures as "what goes around comes around," Şener claimed that those who laid the foundations of the operations to destroy those who oppose themselves are those from the Gülen Movement. Şener recalled the headline from Zaman daily when he was arrested.

Zaman's Editor-in-Chief Ekrem Dumanlı, was detained over the weekend, and his defense of these arrests, by running headlines such as: "There is hard evidence that cannot be revealed," "They were not arrested for journalism," and "Is this journalism?" Dozens of people, including police officers and media staff with alleged links to the Gülen Movement, were detained by an Istanbul prosecutor last week after a prosecutor issued detention warrants for 31 people concerning their alleged pursuit to crush a rival religious group through illegal means.

Following the completion of interrogations by prosecutors, 15 of the suspects were released. Twelve of the remaining 16 were sent to court, including Gülen Movement-linked Samanyolu TV CEO Hidayet Karaca and Dumanlı. On Friday, the court released eight of the 12 detained, including Dumanlı, while ruling for the arrest of the remaining four. The detentions on December 14 were part of an investigation, referred to as the Tahşiye case, into the illegal activities of the Gülen Movement, led by U.S.-based imam Fethullah Gülen. Members of the movement are suspected of perpetrating criminal activities through their operatives within the state, especially the judiciary, the police and the media. The December 14 operation was the result of complaints filed against the Gülen Movement by several individuals from the so-called Tahşiye group, which was allegedly victimized by the movement. The prosecutors who handled this case conducted an investigation and found that the complaints had merit and that the evidence against Gülen's rival was forged as part of a concerted campaign, with police and media angles.

In response to Daily Zaman columnist Kerim Balcı's apology following the December 14 operation, Şener said that the movement's sin is being part of the plot against themselves and they have no right to disregard this fact. In his Zaman daily column on December 19, Balcı said that their sin was actually failing to stand with Ahmet Şık –another journalist who also criticized the December 14 operation against Gülen-linked figures, although he was allegedly previously arrested by Gülenists in the police – and Nedim Şener and added that they are sorry for it.

"When I read Dumanlı's statement after his release, I saw nothing but arrogance. I assume the movement is in some sort of conflict," said Şener, referring to Balcı's apologies from Şık and himself.