HDP deputy: Crises behind, productive period ahead of reconciliation 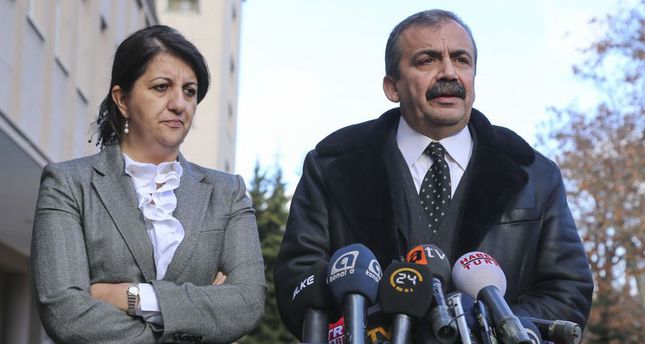 by Daily Sabah Dec 22, 2014 12:00 am
Sırrı Süreyya Önder has stated that crises have been left behind and a productive period is ahead of the reconciliation process. He made the comments after attending a meeting between the Peoples' Democratic Party (HDP) and Deputy Prime Minister Yalçın Akdoğan on Monday morning.

"We have been through numerous fragile and problematic moments for a number of reasons" said Önder, who stated that the main reason behind this was the fact that the reconciliation process is unprecedented in Turkey's political history. He continued by saying that the negotiating actors have sought to learn from the example of other countries which have experienced similar problems and successfully resolved them.

He noted that a new period in reconciliation has begun since the crisis has ended and the government and HDP have agreed what path to follow on numerous issues.

"This does not mean that all issues have been resolved" said Önder, who stated that both the government and the HDP have agreed that they will not close the channels of dialogue and have reached a consensus about which topics will be addressed in the process, which will allow them to carry out the process in an in-depth, qualified and focused manner.

"Those who build their politics based on hatred think that the reconciliation process is about dividing Turkey" Önder said. He underlined that it is crucial to resolve the matter as soon as possible because delays only deteriorate the process and may sometimes pave the way for crises. He signaled that the frequency of meetings will increase to permanently resolve the Kurdish issue in Turkey.

Deputy PM Yalçın Akdoğan has made a statement following the meeting and said that the reconciliation process is proceeding with a strong political will and determination. He added that both sides have expressed their confidence in the process, which is expected to speed up the initiative under the scope of good faith.

The reconciliation process was initiated by the AK Party government. It began when a ceasefire was signed between the Turkish government and the PKK in 2013, followed by a series of democratic reforms to improve the rights of Turkey's Kurdish population. It is reported that over 50 percent of the people throughout the country are in favor of the initiative.